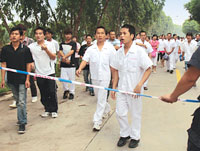 Once the mouthpiece of the Chinese government, the People’s Daily has become slightly heretical.

The paper says wages need to rise to protect stability. It says the made-in-China model made popular by cheap labour and solid infrastructure is in for a crisis.

Recent strikes in multinational firms in South China indicate that the communist party’s hold over labour is not as strong as before.

Analysts say the People’s Daily’s focus on foreign outfits could be savvy because workers feel they have more chance of getting a result by striking at a foreign firm as the companies are concerned about their image in China and abroad.

It cou ld also be that the censors are more willing to allow news about problems at foreign-owned firms to leak out, to create an impression that there are far fewer problems in Chinese-owned factories.