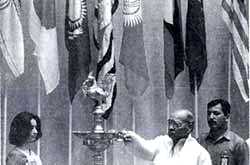 ATTENTION was riveted to the proposed new world trade order at the recently concluded 9-day conference of the Economic and Social Commission for Asia and the Pacific (ESCAP) in New Delhi. In an unusual display of solidarity, several Third World countries spoke out loud and clear on issues that the developed countries tried to raise at Marrakesh, Morocco, where a ministerial meeting on the General Agreement on Trade and Tariffs (GATT) was in progress.

The first salvo was fired by Indian Prime Minister P V Narasimha Rao. In his inaugural address to ESCAP delegates on April 5, he expressed India's anxiety over efforts by some countries to attach social and environmental issues to trade. "We should not countenance any moves to put these concerns on the trade agenda, with the thinly veiled intention to nullify the comparative advantage of developing countries," he said. A similar call to action by developing countries against "protectionism through the backdoor" was given by Commerce Minister Pranab Mukherjee.


New Delhi's stand was echoed by countries like South Korea, Malaysia, Bangladesh, and by Hong Kong. A particularly vocal critic of the North's obstinate bracketing of trade and social issues was Hong Soon-Young, South Korea's vice-minister of foreign affairs. Articulating his country's position, Soon-Young pointed out, "The so-called levelling of the playing field should in no way be evoked as a means to secure new protectionist instruments. Nor should the competitive advantage of low-wage countries be automatically identified with social dumping."

Predictably, the protests of the developing countries had the US, one of the 5 non-regional members of ESCAP, on the defensive. In an outright denial of the Third World's accusations, Arthur (***or Kenneth?) Brill, the US charge d'affaires in New Delhi, iterated his country's concern for the environment and for the rights of workers.

For the most part, however, discussions centred on the theme topic, Infrastructure as a key to economic growth and regional economic cooperation. The conference marked a concerted attempt to formalise the strengthening of infrastructure in the region through the exchange of experience, better human resource development and the mobilisation of financial resources. Most members seconded the view of Chinese foreign minister Liu Huaquiu ***(spelling), who maintained, " Private capital can play an important part in infrastructural development." Such a view would have been unthinkable even a few years ago.

It is imperative that funds for infrastructural development also come from developing countries themselves. Philippe Dupont, permanent representative of France to ESCAP, emphasised that the conference gave his country an opportunity to zero in on priority infrastructural projects for funding. France already has a $200,000 pilot project underway in Vietnam and Hyderabad in India to promote industry dispersal and reduce urban concentrations through seminars, training and policy guidelines.

The most significant outcome of the meet was probably the reaffirmation of a regional identity by member countries, a recognition that closer trade ties could fuel the growth engines of the dynamic Asia Pacific region, which has recorded an average annual growth rate of 6.7 per cent. The Delhi Declaration, adopted at the end of the conference, focused on this issue.

Delegates, of course, had their individual perspectives about the conference. For many like Choi Sung Joo, South Korea's deputy director of the International Economic Division of the Ministry of Foreign Affairs, it was a good meeting ground. "It gave us the opportunity to meet delegations from other countries and exchange information on a variety of issues," he says.

Others looked at it from the long-term point of view. "My mandate is to keep a watch on each country's science and technology policies with a view to future cooperation," says Katsuhiko Masuda, director of the Tokyo-based Office of Resources, Science and Technology Policy Bureau.