Volcanic rocks in Deccan pinned down to a comet 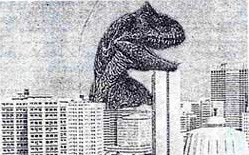 SCIENTISTS at the National Geophysical Research Institute (NGRI) in Hyderabad have recently developed a model to explain the presence of a vast stretch of volcanic rocks -- the Deccan flood basalts -- in the western part of the country. And, they say their model might even explain how dinosaurs became extinct.

The Deccan flood basalts or Deccan traps that cover more than 500,000 sq km or almost one sixth of the country, were formed about 65 million years ago -- about the time when dinosaurs vanished from the earth.

According to geochronologists, a large quantity of magma had accumulated beneath the earth's surface because when the Indian subcontinent drifted towards the Asian land mass, it passed over a hot spot that melted the rocks above it. Further, because the Indian subcontinent drifted at a record speed of 20 cm each year, the friction caused also exacerbated the melting of the rocks.

The scientists say most of the eruption that formed the Deccan traps occurred over a period of about 10,000 years -- a short period for volcanic activity on such a massive scale. "This rapid course of events," says P K Agarwal, one of the scientists on the team, "indicates that a powerful trigger was necessary for the discharge of magma from the subcrustal depths to the surface in such a short time."

The volcanic eruption which is today manifest as the Deccan flood basalts, say the scientists, was possibly triggered off by the impact of a large comet or asteroid -- about 10 km or more in diameter -- that hit the Bombay offshore area and penetrated to a depth of about 20-40 km. This generated enormous energy, equivalent to a 12.4 magnitude earthquake.

The scientists say the crust below the offshore areas around Bombay is just 18 km thick -- it is 30 km thick in other areas -- and hot molten rocks characteristic of the mantle are found closer to the surface than in other regions.

Earlier observations also indicate that in an oval-shaped, 10,000-sq-km area around Bombay, there is a region that exerts a higher gravitational force than the surrounding area. "This," says O P Pandey, another member of the NGRI team, "is indicative of a denser mass of rock in that area."

The smoke, dust and ash generated by the volcanic activity, the scientists claim, could have clouded out the sun for years, interrupting plant photosynthesis and finally leading to dinosaur extinction.