Thai villagers look down upon dams 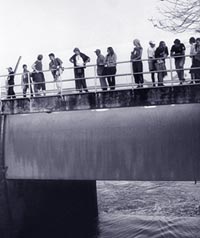 -- Assembly of the Poor, Thailand

Villagers residing along the Mun River in Thailand want the Pak Mun Dam, constructed by the Electricity Generating Authority of Thailand in 1994, decommissioned. For it has brought disaster to them and the Mun ecosystem. The Mun river, which flows from the hills east of Bangkok, joins the Mekong River in Ubon Ratchathani province where Laos, Cambodia and Thailand meet. The river's 265 species of fish have dwindled to just over 45. The dam blocked fish migration routes, shows research the villagers were involved in, and destroyed the largest freshwater swamp forest in the river basin.

Locals believe 'Everything is born from the Mun River'; earlier self-sufficient, communities affected by the dam are today unemployed and poor. When their plight left government unmoved, in November 2002, they decided to close the dam gates for eight months each year. Their struggle continues, and it is hoped they will achieve what people affected by the Rasi Salai project have.

Also located on the Mun, this dam was the first of 13 planned to irrigate over 5,500 hectares of land in northeast Thailand. The salty water in the area made irrigation difficult. More than 15,000 people lost their farmland when the reservoir was filled with salt.

"Now the dam gates have opened and waters receded, the danger to soil and water has been successfully averted," says Phraijit Silarak of the Assembly of the Poor, Thailand, an ngo that campaigns for dam-affected people. People had rallied for the permanent decommissioning of the Rasi Salai dam. And in July 2002, the Thai government agreed to open the seven sluice gates and let the water flow.