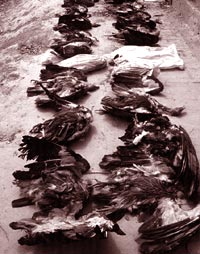 gujarat has become the first Indian state to stop the use of diclofenac, a non-steroidal anti-inflammatory drug used on livestock and considered crucial in the decline of the country's vulture population. Diclofenac is believed to cause poisoning in vultures that feed on dead livestock treated with it. During a workshop on Current Status of Vultures in Gujarat, held at Gujarat Agricultural University, Anand, Gujarat's chief conservator of forest (wildlife), Pradeep Khanna, announced that the state veterinary departments had been asked to stop using diclofenac.

"The state government cannot ban the drug. But we want to reduce its use as much as possible. The state forest department is also planning to request the Drug Controller of India to ban the drug," Khanna said at the workshop, organised by the Bird Conservation Society Gujarat (bcsg). About 500 bird watchers and experts participated in the workshop. While welcoming the government decision, the bcsg suggested undertaking an "unmotivated, independent study" to understand the phenomenon better. "We are strongly against the irresponsible use of pesticides, inorganic manures and any form of medication for domestic animals that might poison the environment," said Luvkumar Khacher, bcsg president.

Many allopathic veterinary doctors as well as ornithologists don't accept that diclofenac was kiling vultures to such an extent. "If diclofenac is the only cause of decline in vulture population, abandoning it should increase the population. But an inverse correlation between diclofenac use and vulture population has not been observed anywhere," pointed out D N Rank and R H Sabapara in their paper Diclofenac -- Is it the only threat to vulture existence?, presented at the workshop.

A new study, however, claims otherwise. It shows that vulture populations exposed to livestock carcasses contaminated by even minute traces of the drug diclofenac are at risk of extinction. "Our findings indicate that diclofenac poisoning is the main culprit, possibly the only one, behind the vulture deaths," says Rhys Green of the uk-based Royal Society for the Protection of Birds, who is the lead author of the paper.