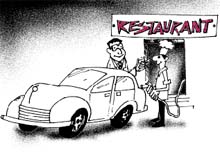 At a time when the use of fossil fuels to power vehicles is incurring environmentalists’ wrath, an alternative source of fuel has emerged as a viable alternative. Additionally, its use solves a disposal problem.

The fuel is nothing but used vegetable oil which has been tested satisfactorily. It has powered a vehicle called the Veggie Van (a motor home) more than 16,000 km across the United States and visited 20 major cities causing absolutely no harm to the environment.

Vegetable oil from various restaurants in America was all that was used along the entire journey. The novel experiment, which started as a college project, eventually culminated in a massive public awareness programme.

Since it was established earlier that bio-diesel can be made from used cooking oil, Veggie Van inventors Joshua and Kaia Tickell decided that it was high time to put the idea to practical use. Since then, fastfood restaurants of America have begun to double as mini-gas stations.

For this purpose a portable fuel processor called the Green Grease Machine was designed. This was a bio-diesel processor that produces a non-toxic biodegradable diesel-like fuel. Next, a 1986 Winnebago LeSharo with a 2.1 litre Renault diesel engine was bought and converted into the Veggie Van.

The idea of using vegetable oil as fuel for a diesel engine first occurred to Joshua and Kaia when they visited a traditional farm in the picturesque southern Germany where vehicles fuelled by vegetable oil were in use.

While studying agriculture and living on these farms, they noticed that farmers were always hauling tanks of a yellow liquid. “This fuel comes from the canola plants which grow on our farms and nearby areas. We put in the diesel and it smells good,” farmers said.

The contemporary diesel engine, however, requires less vicious chemically altered vegetable oil or bio-diesel. Vegetable oil is the basic ingredient of the bio-diesel, a biodegradable, non-toxic fuel that works in any unmodified diesel engine. Not only does bio-diesel require zero modifications to the engine, this fuel works either by itself or blended with petroleum diesel!

The process of converting vegetable oil into bio-diesel fuel is cheap and easy to find. Any vegetable oil, such as used cooking oil, methanol or clear alcohol can be used as fuel.

During the conversion process the ingredients are heated and mixed to produce bio-diesel and glycerin. The glycerin can be used to make soap or a variety of other products. When the fuel is used directly in an unmodified diesel engine it burns 75 per cent more cleanly than diesel with no sulphur dioxide emissions (since bio-diesel does not contain any sulphur).

Soot emission from bio-diesel is lower by 40-60 per cent, while carbon dioxide and hydrocarbon emissions levels are reduced by between 20-60 per cent - making it an extremely desirable fuel form to halt environmental degradation.

Thus, the purpose of The Green Grease Machine was to recycle cooking oil from a restaurant and process it into clean bio-diesel fuel. Bio-diesel can be made from any vegetable oil, including soy, sunflower, canola and even cooking oil from fast-food restaurants.

The Tickells mixed oil salvaged from scrap-yards, boat marinas and hardware stores with used cooking oil. This makes clean burning bio-diesel from the spent restaurant vegetable oil. To do so the couple used an old Champion juicer motor which sucked vegetable oil from a restaurant fryer. The oil was then filtered to separate bits of food and other impurities.