Waiting for the cows to come home? Forget it 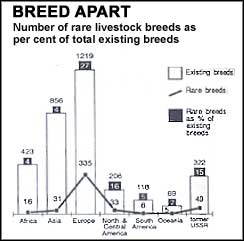 THIS story is one of horrifying domestic slaughter. The preamble to it is that the World Conservation Strategy (International Union for the Conservation of Nature and Natural Resources 1980), recognises livestock breeds as genetic resources, with rare breeds considered worthy of conservation: the genes they carry may be commercially applicable in future.?

Most rare and extinct breeds live out their lives in the developed world. The same fate befalls them in the the developing world. Out of a total of 3,831 breeds of cattle, goat, horse, pig, sheep, ass and water buffalo which were known to exist all over the world in the past 100 years, 618 breeds, accounting for 16 per cent, have already become extinct. Of the remaining 3,213 breeds, 475 breeds (15 per cent) have been identified as rare.

All these figures are high compared to the number of threatened and endangered wild mammalian species (647). The major proportion of the extinct breeds (511) were native to Europe and the former USSR -- a result, feel livestock scientists, of rapid and centralized agricultural development. It is now being suggested that many breeds, particularly of cattle, will become extinct in the developing world through well-meaning aid programmes which involve the importing of the semen of exotic breeds and their development at the cost of local breeds.

However, the diversification of breeds is also very high both in remote countries and in regions with harsh terrains.For example, in India, Rajasthan has the second highest number of breeds (22) or 12 per cent of the total breeds in the country.