Waiting for the mud

Mexican vulcanologists are trying to track the path that destructive mudslides, the fallout of an impending volcanic eruption, might take 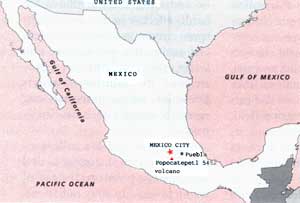 WHEN Mt Vesuvius erupted in Italy, the town of Pompeii vanished. All that was left behind were crusts of dried lava. For long, scientists have held that it is the run-off streams of lava from volcanic eruptions that kills thousands of people, sweeping away entire civilisations. But recent reports have put forth an entirely new explanation.

Scientists have come to the conclusion that it is the mudslides from the volcanic eruption, which follow days, sometimes even months later - and not the molten lava and gases - that are responsible for such scales of destruction. Scientists are now faced with the task of predicting the path of these mudslides.

Volcanic eruptions, like that of Mt St Helena (1980), can have the energy of several hundred atomic bombs, propelling many cubic kilometres of debris into the upper atmosphere. Then, with the first rains, millioiis of tonnes of loose ash are washed into the waters of rivers. Mudslides from the eruption of Columbia's Nevada del Ruiz in 1985 killed 25,000 people overnight.

The giant sleeping volcano, Popocateped (popularly referred to as Popo) in Mexico is now under study. Till one year ago, Popo was taken for granted, but the crater is now sending off ominous smoke signals. The lives of millions living in the towns and cities nearby will be in danger once the eruption takes place. Scientists are thus working overtime to know the path the mudslides might take. They have little time... it could be only months away.

Mexican vulcanologists are using new, powerful computer simulations that have been devised to predict exactly which way the mudflows will head, so that the authorities are able to evacuate only those towns which will be in immediate danger. Evacuating all the millions who live around the volcano will lead to mass panic.

The studies by Jos-Luis Macias and his team were done by starting a simulated mudflow at any height of the volcano and then running it and following it through, keeping a track on how far it could travel. He concluded that not only the small towns around Popo will be hit, but the mudflows might reach as far as the cities of Puebla and Cholula - over 40 km away. Two million lives will be at stake.

New discoveries about the history of Popo's activity back up Macias' model with alarming accuracy. Excavations in Cholula, a city doomed in Macias' simulation, hold the key. Or rather, it is the great pyramid of Cholula, the largest in the world, now half-buried and topped with a Spanish church, which does. Excavations have been going on here to discover the secrets of the volcano's violent past, and also what happened to those who built the pyramid. It was in this region that the Olemic people, one of the most advanced civilisations in the world at the time, had built their empire in 300 BC. For 900 years, Cholula prospered and became increasingly important. Then it vanished.

Recent research by Macias and his team is providing a vital clue which came from searching the huge mudflows that foll6wed Popo's last great eruption. Embedded in its deposits they found objects they could use to date the evept. They found pieces of pottery imbedded in the matrix of these deposits. They also found a piece of charcoal and dated it. And from this they know that a series of mudslides descended on the city about 1,200 years ago. They believe that that is how the Cholula civilisation was destroyed in the 8th century.

Despite such convincing results, a lot depends on how seriously the politicians take scientific predictions, particularly if the next great eruption is only months away. The decision taken by the authorities will be gigantic, and they need a lot of convincing. If Macias' model is right, Cholula will be destroyed again, along with the nearby city of Puebla and a number of other neighbouring towns. The vulcanologists want these places evacuated immediately after an eruption and now they believe have enough evidence to convince the authorities.