Waiting for the "white" revolution

Using artificial methods to increase the number of superior breeds of cows and buffaloes, scientists hope to make India abundant in milk. 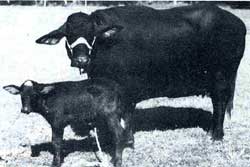 THOUGH India has a record number of cattle, its milk production is low. This is mainly because most of the cattle are of an inferior quality. Worse, the few superior breeds in the country are being neglected and even slaughtered, experts say.

One way of increasing milk production could be to multiply superior breeds by controlled breeding. And this is what the Indian government set out to do in 1987, when it launched a five-year project on cattle herd improvement through embryo transfer (ET) technology. Normally, a bovine female releases one egg in a single year and hence can give birth to one calf. But through ET, a superior cow or buffalo can be made to produce 10 calves in a year and upto 50 in a lifetime.

The project resulted in the production of 300 superior breed calves in the lab. Since March 1992, scientists have been trying to transfer this research to the farmer.

ET involves breaking the normal ovulation cycle of a female so that more than one follicle (immature egg) can develop into eggs. The female is then artificially inseminated with sperm from a bull of superior breed. Twelve days after conception, the embryos are flushed out and transferred to the wombs of surrogate mothers, not necessarily of a superior breed. On an average, 2 or 3 of 6 implanted embryos mature into calves because the successful transfer of the embryo depends on factors such as the recipient's sexual response (unlike the human female, females of other animals are not sexually receptive throughout the year), the embryo quality, season and levels of the progesterone hormone.

"Though the technology has already been developed abroad, we had to standardise it for Indian conditions," says K B C Appa Rao, a biotechnologist at Delhi's National Institute of Immunology (NII), which has been entrusted with developing the technology.

NII has also made creditable progress in a technique called in vitro fertilisation (IVF) or conception in laboratory conditions. Here, immature eggs are taken out of the womb, put in an artificial medium simulating womb conditions and fertilised.

The embryo is then split into two cells, both of which can then grow into identical offspring. But the success of this technique is limited, as more divisions of the embryo can jeopardise the survival of the offspring.

IVF is useful in preserving genetically superior breeds. Says Rao, "Many of our superior breeds are disappearing in slaughterhouses. We get most of the eggs from slaughtered animals -- mainly buffaloes, because cows are butchered only clandestinely."

IVF is particularly relevant for buffaloes because they give birth to fewer offspring than cows. Buffalo calves are also born with fewer follicles than cows.

NII has also developed an embryo sexing technique that enables cattle rearers to buy or sell embryos of known sex. Most Indian farmers prefer female calves for the milk they would yield when mature. Nevertheless, some would have male calves to sell them as meat or to sell their semen. "Naturally, these embryos cost much more than ones whose sex is not known," says Rao.