Waiting to be cleaned 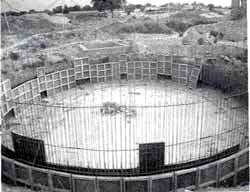 Kanpur -- the second most polluted city on the Ganga after Calcutta -- has come under the microscope during the first phase of the Ganga Action Plan (GAP). However, the city's residents will have to wait for another two years before the river water quality improves because the effluent treatment plant that was scheduled to go on stream last month, will not be completed before March 1995.

During the eight years following the launch of GAP, a large number of offenders, among which are chemical industries and tanneries, have been booked. According to official sources, the problem nevertheless persists because the plant, which is expected to treat 130 million litres a day (mld) of effluent, is not yet ready. As a result, the sewage from municipal drains all over the city continues to be either discharged in the river or used for irrigation in agricultural farms downstream.

The delay in the plant has also hindered optimum use of two other treatment plants nearby because the effluents these plants discharge need more treatment, a requirement the new plant was meant to handle.