Walk on the ocean

Jupiter's moon Ganymede shows hints of what was once an ocean. But it is still too early to say whether the satellite supports life 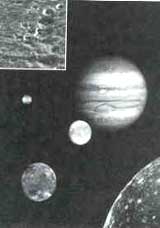 UNUSUALLY detailed pictures taken by the National Aeronautics and Space Administration's (NASA'S) unmanned spacecraft Galileo reveal that Jupiter's largest moon Ganymede has geologic hints of an early sub-surface ocean. Also seen was a chain of 13 craters, which were probably formed by impacts from a broken comet similar to the Shoemaker-Levy comet that smashed into Jupiter in 1994. But it cannot be said with certainty if there is life on Ganymede. "We do not know and that's why we are out there looking. You have heat, liquid water, organic matter coming in from impacts from meteorites. The ingredients are all there," said James Head, planetary scientist on the Galileo imaging team.

If Ganymede indeed had an ocean earlier, it has long since frozen solid. On Ganymede, "it's pretty safe to skate at the moment," Head said, adding, "The surface is too cold for the ocean to exist."

NASA released pictures of Ganymede's surface on July 15 at Los Angeles. They were taken in June 1996 and June 1997. The images suggest that icy volcanoes spewed water instead of rocky lava, as on the Earth, Head pointed out. As much of the moon is icy, scientists wonder whether there is a warmer liquid layer beneath.

Earlier data from the Galileo found combinations of oxygen, carbon, sulphur, hydrogen and nitrogen trapped in Ganymede's icy crust. Ganymede is thought to have formed about 4.5 billion years ago. It is about a third the size of the Earth. It is the only moon with a magnetic field. It has a metallic core and a thin hydrogen atmosphere. About half of Ganymede's surface is bright clean ice. The other half is dark, heavily-cratered terrain made up of "dirty" ice and rocks. Scientists are looking for signs of liquid water. "The Galileo images show us quite dramatically that about half of the surface has been renewed by some process that put bright terrain out onto 50 per cent of the surface," Head indicated.

Pictures taken by the Voyager missions in the late 1970s had led scientists to believe that this was water. The water-spewing volcanoes in the new pictures could provide the mechanism for how the ice was deposited.

It is very likely that about one billion years into its history, Ganymede had a global ocean, very much like the one that scientists suspect lies beneath the frozen expanses of Europa, another of Jupiter's moons. Europa is one of the main targets of the search for life in the solar system and is the focus of the two-year mission extension of Galileo.