Walking down to work, how safe is it?

What about the rights of pedestrians?

In William Shakespeare's Comedy of Errors, Antipholus asks Syracuse, "Will you walk with me about the town, and then go to my inn and dine with me?" The experience is very likely to be a harrowing one if you happen to be in an Indian city -- most certainly in the metros. Road accidents in the country claim more than 80,000 lives every year, mostly pedestrians, cyclists or pavement dwellers. With the country's expanding middle class looking at motor vehicles as an indispensable extension of itself, the pedestrian's right to safe and free passage has become a casualty. The document of the first ever National Urban Transport Policy sums the situation aptly: "The use of cheaper non-motorised modes like cycling and walking has become extremely risky, since these modes have to share the same right of way with motorized modes."

However, the government has done little to mend matters. At a press conference on the sidelines of the "Conference on Alternative Technologies for Public Transport" -- held in New Delhi between March 21 and March 23, 2006 -- Anil Baijal, secretary, Union ministry of urban development, admitted, "Urban transport is a state subject, and so, I cannot intervene." State governments on their part, cannot look beyond revenue from private vehicles. It also does not help that sidewalks and pavements have been taken over by hawkers, vendors and urinals.

According to a World Bank paper of 2005, more than 43 per cent of commuters in Mumbai, walk to work -- about four times the number of those who use private vehicles. People who commute by walking outnumber those who use their vehicles in most other Indian cities as well (see table: Those who walk). But these are figures for which our civic authorities have little respect. Sidewalks and pavements have been chipped away to provide for wider carriageways. The flyover boom has compounded matters for pedestrians.

However, all is not lost. Some have taken up cudgels on behalf of the pedestrian. Among them is Kanthimathi Kannan, a Hyderabad resident. In a letter to the chief justice of the Andhra Pradesh High Court, she has petitioned for the "right to walk on pavements". She has asked the chief justice to treat her letter as public interest litigation (pil). That might not be the proper procedure to file a pil, but the thought behind it cannot be ignored. "In Mehidipatnam there are no pavements left for walking. There is no place for senior citizens to walk on the road. Nothing moved ahead even after meeting and writing to higher officials in the Municipal Corporation of Hyderabad (mch) and senior government officials. I had no option, but to go to court. Where do the citizens of this country walk?" asks Kanthimathi. 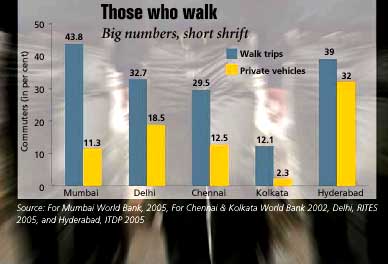 The situation in Kanthimathi's home city is particularly disquieting. In 2004, road accidents claimed 419, mostly pedestrians. According to a World Bank study of 2002, around 20 per cent of commuters in Hyderabad, walk. But according to a more recent study by Chennai-based engineering firm l&t Ramboll, the figure is much higher. This study drew upon household surveys to conclude that pedestrians constitute more than 39 per cent of traffic in Hyderabad.

A study by New York-based Institute for Transportation and Development Policy suggests mch needs to significantly improve walking and cycling facilities. The suggestion also holds for the rest of the country.

Things, however, might just improve if new policies are implemented as envisaged. For instance, the new urban transport policy of the central government says: "The government would give priority to constructing pedestrian paths in all cities, under the National Urban Renewal Mission." It adds: "The Central Government would support the construction of safe pedestrian crossings at busy intersections and at high traffic corridors."

Walking may at some time become a less hazardous occupation.