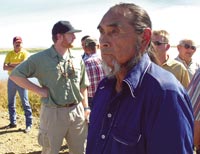 Descendants of Native American tribes and the 'cowboys' in the us government are at loggerheads over money matters. In fact, mediators have been appointed to settle a bitter financial dispute between the two. The American Indians claim that they are yet to receive about us $143 billion for farming, timber and oil rights, on 21.6 million hectares of land redistributed to them in accordance with an 1887 law. They assert that the government, through a mix of incompetence, indifference and theft, has failed to pay up the same.

The dispute can be traced back to the General Allotment (or Dawes) Act of 1887 that broke up Indian reservations where tribes had been resettled earlier on in the century. Much of the land was split and ownership passed to individual Indians. Money raised from the land was put in a trust fund administered by the us Department of the Interior, and redistributed to individual accountholders. But over a period, the government's record-keeping fell into disarray. The Congress has now stepped in. And following the appointment of mediators approved by both sides, there is renewed hope.