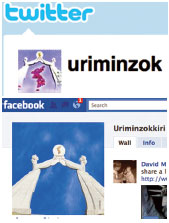 On August 12, Pyongyang tried to change that image. It created a Twitter account, @uriminzok, meaning “our people”.

It has over 4,500 followers. The move follows the launch of a North Korean YouTube channel, JucheKorea, in July. It hosts close to 80 videos. Western commentators are unimpressed. “North Koreans have been investing heavily in information technology for over 20 years.

They have a cadre which creates content for social networking sites. But this is a problem!” said Hazel Smith of Cranfeld University in the UK. Smith, a long-time North Korea researcher said, “the channel has a lot of propaganda laced with bombastic rhetorics; US and South Korea are often called warmongers.”

Sung-Yoon Lee, international politics expert at Tufts University in Boston said, “The agency responsible for the videos and tweets is a major arm of the country’s ruling communist party.”