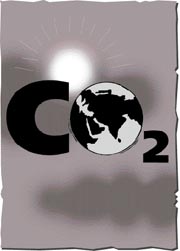 the Earth has already witnessed the warmest era some 14.5-17 million years ago during the Miocene period. Referred to as the "Miocene Climate Optimum", it is regarded as the warmest era in the last 35 million years. Fossil evidence suggests that the mid-latitude temperatures were as much as 6 degree C higher than the present. Many researchers believed that high carbon dioxide (co 2) in combination with oceanographic changes resulted in the greenhouse effect, which was responsible for global warming in the Miocene period.

Now, a new study has revealed that co 2 levels were surprisingly low throughout the Miocene era. The scientists conclude that the greenhouse gas effect of co 2 cannot explain the Miocene warmth. Other mechanisms must have had a greater influence (Nature , Vol 399, No 6734).

The scientists, M Pagani, M A Arthur and K H Freeman, used a relatively new molecular isotopic approach that is very effective in tracing co 2 in glacial and inter-glacial cycles of the past several hundred thousand years. The records bear little relation to an expected association between co 2 and long-term climate change. In fact, low co 2 values span the warm "Climatic Optimum", which ended about 14.5 million years ago. Meanwhile, rising co 2 levels seemed to accompany global cooling and expansion of the East Antarctic Ice Sheet about 12.5-14 million years ago. < br="">
If Pagani and his colleagues are to be believed other factors, for instance, greenhouse gases like methane and water vapour, and ocean circulation, might have been responsible for Miocene warming. Low co 2 levels may also have increased the sensitivity of the climate system to heat and vapour transport. Alternatively, changes in atmospheric water vapour and moisture supply to the Antarctic continent may have promoted global cooling and growth of the East Antarctic Ice Sheet.

The new finding has profound implications on our understanding of the Earth's history, including climate change and ocean chemistry. It also raises the prospect that projected co 2 levels in the next century may be the highest in at least 25 million years.