Warmer days Down Under 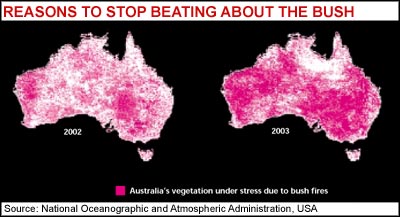 for many, this might not come as a big surprise -- global warming is playing a key role in increasing the severity of the drought that threatens Australia. This is the conclusion of a study called Global Warming Contributes to Australia's Worst Drought, conducted by researchers from Australia-based Monash University and Worldwide Fund for Nature (wwf)-Australia.

Since March 2002, Australia has been experiencing its worst drought since 1910. It is associated with El Nio -- the warming of the equatorial Pacific Ocean that occurs once in every three to seven years. Most of the Australian droughts have been linked to El Nio.

In 2002, temperatures across Australia were significantly higher than in any other drought year -- 1.65C higher than the long-term average of 26.6C (see table: Hot, hotter, hottest). "These cannot be explained by natural climate variability alone," says David Karoly, a former professor of meteorology at the Monash University.The higher temperatures caused a marked increase in evaporation rates. This placed the crops under stress. Drier conditions also lead to bush fires -- the most severe in Australia's history. The worst affected was the Murray Darling basin -- the food bowl of the country. The basin received its lowest ever March-November rainfall in 2002 -- only 45 per cent of the normal.As per a forecast of the Australian Bureau of Agricultural Resources Economics (abare), production of the country's four major winter crops -- wheat, barley, canola and lupins -- is set to fall by 14.8 million tonnes in 2003. The country's export earnings from crops would be down by 19 per cent to us $12.9 billion. abare also predicts a drop of 3.7 per cent in the overall value of Australia's commodity exports. The gross value of farm production is expected to fall by 21 per cent to us $30.4 billion and earning from farm exports would decrease by 13 per cent. Overall rate of economic growth is expected to come down by 0.75 per cent.

Officials of the meteorological department expect the drought to end soon. "El Nio droughts have a historic pattern of breaking down between December and March," says Blair Trewin, a climatologist at the country's National Climate Centre. Experts assert that the impacts of future droughts would be much worse with accelerating global warming. Australia-based Commonwealth Scientific & Industrial Research Organisation has projected that the country's temperatures could increase by 1C to 6C by 2070.

In wake of the study, wwf has criticised the Australian government for not ratifying the Kyoto Protocol. A spokesperson for the Australian ministry for environment said the country would not ratify the protocol unless developing countries also reduce their emissions of greenhouses gases.