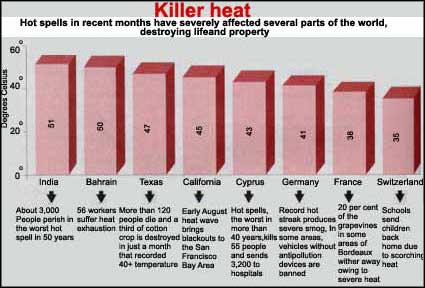 This year is the hottest year since temperature records have been kept. Scientists believe that the Earth is getting warmer because of the build-up of carbon dioxide and other greenhouse gases in the atmosphere, produced largely by the burning of fossil fuels. The Inter-governmental Panel on Climate Change, an international group of scientists, has projected that the surface temperature of Earth could rise by about 1 to 3.5Cby the year 2100. Scientists also say that in the next 100 years, sea levels could rise by 0.5 m, threatening heavily-populated coastal areas such as Mississippi and Bangladesh. Hurricanes and droughts will become more frequent and more severe.