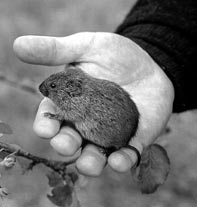 for the first time, scientists have found a direct relationship between global warming and the evolution of contemporary wildlife. The scientists from us-based Stanford University have published their findings in the September 7, 2004, online edition of the journal PloS Biology.

The scientists conducted a genetic analysis of two species of rodents -- the montane vole (Microtus montanus) and northern pocket gopher (Thomomys talpoides). They collected dna from living animals and fossilised specimens, and then compared the two. The researchers were particularly interested in animals that were alive during two climatic events -- the Medieval warm period (850-1350 ad), when the Northern Hemisphere experienced a slight warming trend; and the little ice age (1350-1950), when the hemisphere cooled.

Since voles and pocket gophers prefer relatively wet grasslands, the scientists expected to see a decline in the population of both species during the Medieval warm period when their habitats dried up, and an increase during the little ice age when the climate was wetter. This prediction was confirmed by an analysis of fossil abundance in Lamar Cave of usa, which revealed a 40 per cent drop in the vole population during the warmer period, along with a 50 per cent decline in the number of pocket gophers. As expected, fossil abundance for both species rose dramatically during the little ice age as precipitation levels increased.

The findings established a direct correlation between climate change and population size. But how did voles and gophers respond genetically to these episodes of global warming and cooling? As per earlier studies, when an isolated population shrinks, inbreeding increases. As a result, surviving offspring end up with similar dna. Over time, this lack of genetic diversity can jeopardise the entire population, because each individual inherits the same vulnerability to diseases and other external threats. "When you decrease population size, you have the potential of eliminating much genetic diversity," the researchers explained, adding: "That's what happened to gophers during the Medieval warm period. We found that they underwent a population size reduction and a decline in genetic diversity."

But voles had a different response to medieval warming. "They didn't show any reduction in genetic diversity, even though they did show a reduction in population size," the researchers said. That's because voles routinely look for mates from other colonies. They disperse quite freely, and that results in an elevation of genetic diversity even when their population size is reducing.