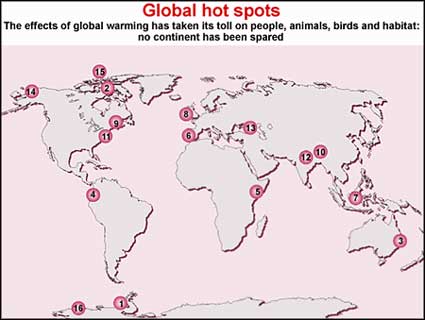 The burning of fossil fuels leads to the release of carbon dioxide and other gases into the atmosphere. Once in the atmosphere, these gases act like glass walls and trap heat on the Earth's surface. If the rise in carbon emissions goes unchecked, the planet's average temperature could rise by as much as 3.5C, say scientists. The effects of global warming are already being manifested in many ways: heat waves, melting polar ice and rising seas. Scientists say that local impact is not easy to predict: some areas could suffer stronger storms and other places severe drought.

Global hot spots
The effects of global warming has taken its toll on people, animals, birds and habitat: no continent has been spared

1. antarctica: Shrinking sea ice has reduced the population of the Adelie penguin by 33 per cent in 25 years

4. Colombia: Mosquitoes carrying dengue in the Andes that were limited to altitudes no higher than 1,000 metres, now appear even at 2,195 metres

5. kenya: In 1997, hundreds of people die due to malaria in the highlands, where people had previously not experienced

6. Spain: More than 506,000 hectares of forests went up in flames during a severe drought

7. Indonesia: Up to 800,000 hectares of land burned in 1998, including parts of the already rainforest habitat of the Kalimantan orangutan

9. New Hampshire: The length of time Mirror Lake is covered with ice has declined about half a day per year during the past 30 years

11. New York City: In 1999, the city had its warmest and driest July on record, with temperatures climbing above 35C for 11 days

12. India: The Gangotri glacier is retreating by 30 metres per year

13. Russia: In the Caucasus mountains, half of all glacial ice has disappeared in the past 100 years