Wars of the green kind 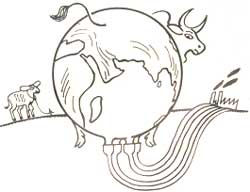 WILL HE go? Will he sign? Will he give money? All these and many more questions on the behaviour of the US President George Bush are threatening to overtake the Earth Summit at Rio. Bush's cat and mouse strategy is an effort to push the Europeans, Asians and Africans to accept the US position. But will it work or not will be answered this fortnight in Rio. The latest salvo is against the biodiversity convention. The US has stated that it will not sign the "fundamentally flawed" biodiversity convention, which is one of the two big agreements that environmentalists want to see signed in Rio. France has already stated that it will not sign the convention.

The US is unhappy that the treaty fails to give adequate patent protection to American companies, as the draft prepared in Nairobi a fortnight ago asks for companies to transfer biotechnology to the South. The US also wants clear control over the Global Environment Facility (GEF) of the World Bank, which will provide the funds for biodiversity conservation. Developing countries had fought bitterly in Nairobi to gain assurances that the GEF would be modified to make it more democratically managed.

A few weeks ago, Bush had said he was not going to Rio as he was not willing to sign a bad deal on global warming. The final climate convention -- a global treaty to discipline the production of greenhouse gases -- is a watered down version of earlier proposals with no specific targets.

But, at the same time, the US government is pushing for a treaty on forests and has pledged an additional US $150 million to developing countries -- doubling current US bilateral assistance for forests. The proposed convention will put pressure on developing countries to accept global management of their forests, a proposal they have bitterly fought against for the past two years.

In response, the Indian government has said that if the North opposes the biodiversity convention, it will reconsider its own decision to sign the climate convention. Making this statement on the eve of his departure to Rio, the minister of state for environment, Kamal Nath, said India "may even stay out of the convention".

The two years of preparations for the conference have highlighted the growing divisions between the rich North and the poor South over the use and control of the earth's resources. The Rio meet, many observers believe, heralds the end of the cold war and the beginning of a green war.

The most abrasive of all issues being discussed is the right to development which the South wants enshrined in the Earth Charter to be signed at Rio. The US has fought against the South seeing this as tantamount to giving the South a clear hand to threaten the world environment.

The second issue concerns money and who is going to pay the clean-up costs. The South is insisting that the North should bear the burden of change as it is most responsible for global ecological havoc. But the North has been trying to dilute this responsibility. In the climate convention, the North has successfully averted any mention of its current and historical responsibility for the accumulation of greenhouse gases in the atmosphere. While mentioning common and differentiated responsibilities of nations, northern delegates insisted on adding the word "capabilities". This means that industrialised countries will take the lead in cutting emissions because they are more capable of doing so, and not because they are responsible for the pollution and morally and legally bound to act. In the play of words, typical of UN meetings, the US delegation had remarked, "We all agree that industrialised countries should take the lead, but we do not agree why".

With the role and responsibility of the North as seen by the South, unacceptable, the South's insistence on additional money and transfer of technology for meeting global regulations is seen as being unnecessarily difficult. The estimates for sustainable development submitted by the secretariat of the Rio conference has made US delegate Robert Ryan remark, "Nobody in their right mind thinks that the international community is going to come up with US $125 billion as Third World grants."

The question of funds has divided the North. While the US is reluctant to make commitments, the Scandinavians, Germans and now the Japanese are being more generous. Chancellor Helmut Kohl of Germany, this fortnight, called on the US to strengthen its environmental policies before Rio. Pinpointing the blame, Kohl said that US is blocking a World Bank proposal to triple the size of the US $1.5 billion GEF. He added, "The industrialised countries must face their special responsibility. Our 20 per cent population produces about 80 per cent of the world's carbon dioxide emissions. So it is clear who has the chief responsibility and who must bear the burden."

Stung by this criticism, the US President has responded in anger that Rio is all rhetoric and little action. He has unveiled his own action plan which asks the developed world to join his contribution to protect forests, among other things.

Just as the North-South conflict is becoming obvious, so is the schism in the North. In another development this fortnight, the European Community's environment commissioner, Carlo Ripa di Meana, has said that he will boycott Rio which is going to be "a US-led cocktail party."

Ripa de Meana is furious with, what he called, "ruthless lobbying" by the US to scuttle the EC's plans to impose a carbon tax to bring down emissions. "I have decided not to go to a conference where it seems everything has been arranged," he told a recent press conference. The proposal was opposed by countries within the community itself and was made conditional to Japan and USA's acceptance of the idea. Ripa de Meana is also angry that he has not been able to collect the minimum "dowry" to take to Rio -- a clear timetable for doubling aid to a minimum of 0.7 per cent of gross domestic product.

With all these factions and diffidences, what the South will get at Rio is hard to tell. But clearly it has a lot to lose.