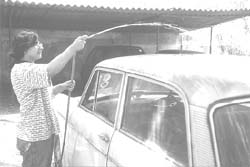 due to the severe water crisis in Delhi, the state government has imposed a ban on washing cars, buses and railway wagons with potable water. The ban also includes gardening and laundry. The decision was taken at a meeting between the Delhi Jal Board officials and Delhi chief minister Sheila Dixit. Instructions have been issued to the railways and the Delhi Transport Corporation to get their wagons and buses washed outside the city. The order will also be applicable to buses coming from other states to the national capital.

The government has decided to provide tubewell water to the laundries for washing purposes. It has been decided that action will also be taken against unlicensed swimming pools in the city. Since the last two years, Delhi has been facing an acute water crisis during the summer months. As in the past, the city government has once again blamed the Haryana government for not releasing enough water for Delhi. On the other hand, Haryana claims that the people of Delhi are already getting more water than an average person gets in Haryana.