Waste manager dumps it in river 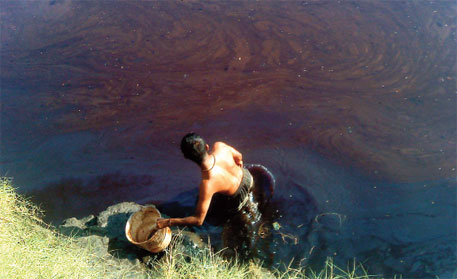 AFTER years of dilly-dallying, the pollution control board finally issued closure notice to Gujarat Enviro Protection Infrastructure Limited (GEPIL) on November 30. The Surat-based waste management company was caught disposing of hazardous waste into the Mindhola River flowing by the city.

Since 2007 people have reported deaths of 300 buffaloes and thousands of fish in the river. But the Gujarat Pollution Control Board (GPCB) started inquiry into its operations only on November 18 when residents of Budiya village complained seven buffaloes had died after drinking water from the Unn Khadi, a distribuitary of the Mindhola.

Residents of 23 villages, affected by the 30-kilometre river stretch in Surat, have constantly complained of the deaths. “This time, we decided to exert pressure on GPCB and assembled en mass to complain. We suspected GEPIL of discharging untreated hazardous waste into the river,” says Prakash Bhai, a resident of Budiya village.

GEPIL, which started operations in 2002, receives around 200 kilo litres of liquid hazardous waste per day from industrial estates in Gujarat, including the country’s two most polluting estates—Vapi and Ankleshwar. The treated waste should be stored in its treatment storage disposal facility. 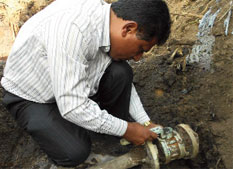 Following complaints, the GPCB started digging near the company’s boundary wall, about 150 metres from the Unn Khadi, and found loose soil. “This indicated the area had been dug the night before,” says Anil G Patel, regional officer at GPCB. Digging further, they found GEPIL had connected six of its pipelines to the common effluent treatment plant pipeline of one Sachin Textile Industrial Estate of Gujarat Industrial Development Corporation (GIDC). Sachin Textile’s pipeline carries treated effluent to the Mindhola. They also found parts of a pipeline in the area. “It seems GEPIL dug up the area to remove the pipelines,” says Patel. GPCB has ordered closure of the plant, but digging is still on as it suspects presence of more such illegal pipelines.

Residents are now ascertaining the compensation amount to recover from the company, says Prakash Bhai.

GPCB has collected samples of effluent from the illegal pipeline but is undecided on where to send it for testing. The regional office does not have proper equipment for toxicological study, says Shiekh.

Residents have lost trust in the board because it has ignored the issue since 2007. “More than 40 complaints to GPCB, the Central Pollution Control Board and the Ministry of Environment and Forests availed no response,” says M S H Shiekh of Surat-based non-profit Brackish Water Research Institute.

National Institute of Oceanography had conducted a study on the cause of fish deaths in the river in 2008. The study was commissioned by GPCB. “But it did not reveal the information even under RTI,” says Shiekh.

GEPIL came under scanner because its incinerator, that burns hazardous waste, had not been in working condition for years. Replies to RTI applications revealed the board had inspected the company 26 times between 2005 and 2007. Only nine times did it find the machine working. “How did GEPIL treat the large amounts of waste that came every day?” wonders Sheikh. GPCB dismantled the incinerator last year.

But within two months GPCB issued the company a new licence; this time to treat waste by co-processing it. This involves blending waste with stabilising chemicals and then burning it in cement industries. But the fishes and animals using the river water kept dying.

Sheikh alleges GEPIL disposed of some of the untreated waste into the river and dumped some in its treatment storage disposal facility. Repeated attempts to contact GEPIL officials yielded no result.