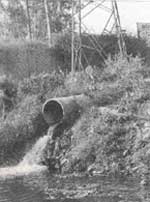 POLLUTION, like other disturbing facts, can be swept under the carpet. Thus it is that the first ever inventorisation of hazardous waste generation in the National Capital Region (NCR) by the Tata Risk Management Services (TRMS) has found that the area generates none!

Even officials within the Central Pollution Control Board (CPCB), which commissioned the study, complain about the manner in which it was instituted in January 1994. A senior scientist has said that the terms of reference were so limited that the results were a foregone conclusion.

The CPCB wanted the inventory confined to waste generated within the conforming (sanctioned industrial) areas only. Moreover, as CPCB chairman Dilip Biswas admits, "We had asked TRM to look into hazardous waste which does not fall into the category prescribed under the water and air pollution acts."

A majority of industrial units in Delhi, New Okhla Indistrial Development Area (NOIDA), Faridabad, Ghaziabad and Meerut are in the nonconforming areas. In Delhi alone, over 50,000 units are unregistered, 30,000 of them being in nonconforming areas. Lead smelting units and those producing arc furnaces and chemical dyes exist here. That a mere 1,000-odd units have environmental clearance has been ignored -- some say, deliberately.

Critics say the very definition of "hazardous waste" fouled up the study. Most hazardous waste generated was not even studied, as it are disposed of through water in drains, cesspools and sewage systems.

But despite suffocating restrictions, the TRMS report has lambasted the Nangloi Udyog Nagar and industries in Anand Parbat and Wazirpur, Delhi. Ghaziabad, Meerut, NOIDA and Faridabad industrial areas have been similarly reprimanded. The TRMS has given a number of formulae to gauge the amount of waste generated.

The inventorisation exercise is a far cry from what it should actually have been. Environmentalist Ashish Kothari of Kalpavriksh says, "If we do not know what kind of waste is being generated from which units in which areas, incidents like the toxic waste-burning in Kardampuri in Delhi will continue to occur, jeopardising the lives and health of people."