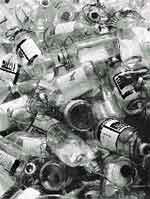 Organised by Srishti, a Delhi-based non-governmental organisation ( ngo ) working on medical and hospital wastes disposal, the seminar was attended by hospital administrators, medical representatives from the city, social workers and government agencies such as the ministry of environment and forests and the Central Pollution Control Board ( cpcb ). A manual on hospital wastes management prepared by Srishti was also released at the seminar.

Glen Mcrae, a hospital wastes management expert from the us , was also present at the seminar. He had come with the express purpose of imparting lessons learnt in the us on handling and managment of hospital wastes. He is also to attend similar seminars in Mumbai and Calcutta. "India must set up its own local models while tackling with the issue of hospital wastes," he said. He stated that incinerators used to dispose hospital wastes (besides municipal wastes) in the us were on their way out. "Emission standards set by the us Environmental Protection Agency ( epa ) have made operating incinerators almost too expensive a proposition for hospital administrators and municipalities."

Others present at the seminar included Ann Leonard of the us -based Multinational Resource Center. She has played a vital role in informing Indian ngo s and the press about the ills of incineration. In March 1996, Paul Connet, chemistry professor at the St Lawrence University, New York, had visited Delhi, Mumbai and Calcutta. He had earlier helped in creating awareness on the problems the communities in the us faced with regard to incinerators. People like Leonard have ensured that there is a constant vigil and flow of information vital to deal with hospital wastes disposal.

Pointing out that the amount of potential infection-causing wastes from hospitals is not very large, Mcrae said that proper segregation, labelling and appropriate treatment of wastes would go a long way in reducing the problem caused by such wastes. "The manual prepared by Srishti is based on a model that has sucessfully been used in two hospitals in Delhi. If this is used by other hospitals, it would help the city in tackling the wastes."

The issue of hospital wastes, which has plagued cities such as Delhi for years, was highlighted in March 1996, when the Supreme Court directed all hospitals in Delhi to set up incinerators, so that all the wastes generated in the hospitals could be burnt at the point of generation itself. "While this can take care of the biological problem of hospital wastes with the pathogens destroyed, it becomes a chemical problem when plastic-based articles are burnt. Entire communities face the risk of being exposed to dioxins, which are carcinogens," stated Ravi Agarwal of Srishti.

He added that instead of an end-of-pipe approach, a more up-front approach would be effective. "If the waste is segregated at every stage of generation, the sharp objects and plastic-based articles could be autoclaved (whereby steam disinfects anything inside the autoclaver, preventing its being burnt and releasing dioxins), and pathogen-carrying substances such as bandages could be incinerated. These operations could be centralised so that each facility could be monitored, rather than numerous incinerators functioning throughout the city," said Agarwal.

Delhi produces about 5,000 tonnes of garbage every day, with nearly 50 tonnes coming from hospitals. A mere five tonnes of this is hazardous and poses problems to the society, especially to ragpickers who are exposed to used needles and other sharp objects. Moreover, articles such as needles, intravenous tubes and bottles may be reintroduced in the market by the ragpickers.