How to make plants yield salt 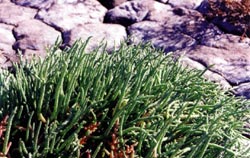 the coast may not look like a sea of salt anymore. Instead, it may cradle plants that provide salt. Scientists from the Gujarat-based Central Salt and Marine Chemicals Research Institute (csmcri) have figured out a way to obtain salt from Salicornia brachiata -- a halophyte (salt-tolerant plant species). The leafless shrub grows in coastal wastelands having high salinity and moisture levels. In the West, people love to eat the shrubs's tender tips as salad.

Unlike ordinary salt (mined or extracted from seawater), saloni -- the new salt -- has important micronutrients such as calcium, manganese, iron, zinc and copper. The shrub is said to yield around three to four tonnes of salt per hectare.

"The findings make large-scale cultivation of saline land an attractive proposition," claims Pushpito Ghosh, director of csmcri. However, the process would not help regenerate soil. "Since S brachiata needs a lot of water to grow, its cultivation may increase the salinity. Therefore, commercial cultivation must be done near the coast so that the top deposition of salt is washed-out with every high tide. Otherwise, the land would further deteriorate. In the worst scenario, the plant may even stop growing," cautions J S Patolia, a scientist with csmcri.

Salt can be also extracted from other halophytes, though it may not be financially viable to do so in those accumulating low quantities of salt. There is another encumbrance -- the extraction process makes the new salt costlier than its ordinary counterpart. csmcri is hopeful about creating a niche for the 'plant salt' in the market as a health product. "We have applied for a patent and it will take a few years to begin commercial extraction," tells Patolia.