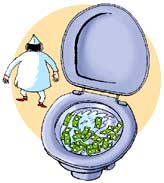 This is no April fool joke. On April 1, 2005, the Manipur cabinet decided in an 'emergency meeting' to spend Rs 12.17 crore for transferring the equipment for a sewage project from Kolkata port to Imphal. Just a few days ago, on March 19, 2005, the cabinet had decided only Rs 2.13 crore will be needed for the work. The equipment has been imported from France and has been lying at the Kolkata port for several months. The latest decision is said to have been taken in view of the increasing burden of holding charges at the port.

The government will release the said amount from the state budget; Rs 0.67 crore will be spent on transport while the rest will pay for various dues, including customs duty and shipment clearing and warehouse detention charges. The cabinet also discussed in details the project's implementation.