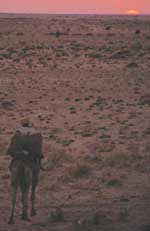 with its new draft policy to promote agro-based projects in the wasteland ready, Rajasthan joins the group of states that have recently formulated similar policies. The draft policy offers wastelands to private companies at throwaway prices for plantation, as is being done in Chhattisgarh, Tamil Nadu, Andhra Pradesh and Gujarat. But unlike other states, the move has sparked strong protests in rural areas of Rajasthan. People have questioned the availability of land and its transfer to private companies.

According to Sohan Lal, secretary, revenue department, the idea is to put large tracts of government wastelands to productive use by planting jatropha. The Centre has identified ratanjyot (Jatropha curcas) as a promising oilseed bearing plant for biodiesel. The policy specifies that up to 500 hectares (ha) will be allotted for non-biofuel crops and up to 20,000 ha for biofuel crops. Land identified by district collectors will be leased initially for a period of 30 years to companies registered under the Indian Companies Act.

"These lands may be waste as they do not provide revenue to the government, but are used by communities as a source of fuel and fodder. They are also catchment areas for waterbodies," says M S Rathore of the Institute of Development Studies, Jaipur. Government records show as much as six million ha lie unused. But as Neelima Khaitan of Seva Mandir, an Udaipur-based non-governmental organisation (ngo) says, "There are no continuous patches of 500 ha available. In Udaipur district, most revenue lands are heavily encroached upon, followed by pasture and forest land." She points to fierce conflicts over land, especially revenue land, forcing numerous ngos working on afforestation to instead focus on private lands or degraded forests. To complicate matters, during election time, the government regularises a number of encroachments on revenue wastelands.

Wastelands come under revenue, forest, panchayat or private ownership. Government sources point to revenue land as a possible target for plantations, though the policy does not specify this. When contacted, Ram Narayan Dudi, revenue minister, declined to comment. Other officials also avoided commenting on the policy. Sohan Lal said the policy was yet to be presented before the cabinet. Sources say the presentation of the draft has been delayed owing to its wide criticism.

Competing claims over land, especially cultivable wasteland, explains the massive rejection of plans to hand them over to yet another 'outside' party.

A recent meeting in Jaipur on Right to Information, saw representatives of 25 groups like Jangal Jamin Jan Andolan and Mazdoor Kisan Shakti Sangh (mkss) from different parts of the state debating this policy instead. The outcome was a resolution to oppose the move at every step. Letters have been pouring in to the chief minister's office from panchayat sarpanchs threatening agitation if the government goes ahead with its plans.

In a state where animal husbandry is an important source of livelihood, there are already concerns about the ever-reducing pastureland. "In our area, landholdings are very small and each family owns livestock which graze on these lands. If the wastelands are given to industrialists, we will never regain access to the land," says Ramesh Nandwana of Udaipur district.

Nikhil Dey of mkss says the policy would also affect proposals for wasteland development under the recent national rural employment guarantee act. Khaitan feels that wasteland development is in fact the best way to address the issue of rural poverty. "If jatropha is to be grown, why can't farmers do it and sell the produce either in the form of seed or oil to companies?" asks Nandwana. But the policy wants companies to both cultivate and sell the final product. Though the Rajasthan government is offering rural land, it has failed to include rural communities -- the most affected -- who could benefit the most from the policy.