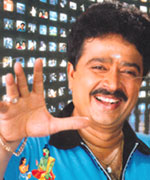 Nammal Mudiyum in English means "We can do it". That's exactly the message of this CD. It tries to disseminate the fact that rainwater harvesting (RWH) can be practiced by anybody who is keen on conserving water .

Produced by Srinivas Youngmen's Association of Triplicane, the film has been shot in locations in Chennai where water harvesting has been implemented including the 'Rain Centre' developed by Akash Ganga Trust in association with the New Delhi-based non-governmental organisation, Centre for Science and Environment. The complex was recently inaugurated by chief minister J Jayalalithaa.

And if you thought that it would be an out and out serious affair, you were mistaken. With actor S Ve Shekher around, the audience can expect a fair share of comedy too. It is Shekher, the protagonist, who brings home the point that RWH provides a hope to frequent water crisis and makes them realize how easy it is to adopt. The water travails of three families in different stratas have been shown in the CD. The Association has produced the CD for the Chennai Corporation on their behest. One of the association members, V Narayanan has written the script.