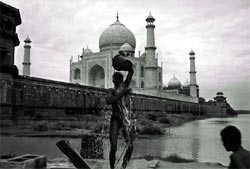 Pallava Bagla's first solo exhibition, Drops of Life, was a tribute to water. The photos, taken over two decades, were on the politics, pollution and poetics of water. The exhibits comprised photographs of areas as diverse as Ladakh, Haryana, Gujarat and Kolkata.

The opening exhibit was on Naga sadhus at the Maha Kumbh in Prayag. Bagla's lens captured the religious frenzy of the event -- the silhouetted forms of the hundreds of saints charging into the river; naked feet kicking the sequinned waters; swords drawn and a speck of a trident looming ominously in the horizon like a question mark.

Another exhibit that caught the eye was of elderly morning walkers at the Lake area in south Kolkata. The walkers are barely visible, their forms engulfed in the shade of the trees hugging the emerald waters of the lake. But for those familiar with the area, the pathos is unmistakable. The lake is polluted but for Kolkata's residents it is place of tranquility and solace.

Another deceptively beautiful photo is that of the Yamuna in Delhi. In the twilight, Bagla's lens has captured the waters and the horizon blushing a deep crimson. A white foam rides the waters. The caption says: Snow on Yamuna. A closer look, however, reveals that the snow is actually contaminants.

No matter what their individual worth, together the photographs failed to make an impact because of their different if not differing concerns.