Panel to make the suggestion before the Cabinet in June 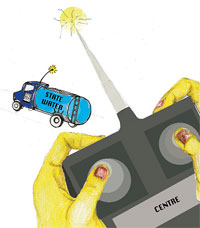 WATER resources and planning may shift from the State to the Concurrent List of the Constitution. The Ashok Chawla committee will make this suggestion when it tables its report before the Cabinet in June this year, sources say.

The committee was set up in February this year to draw a roadmap for distribution of natural resources.

The Ministry of Water Resources has long held that presence of the subject in the State List is not appropriate as it limits the Centre’s role. It should, therefore, be shifted to the Concurrent List (see ‘Water in the Constitution’). The ministry’s secretary, Dhruv Vijai Singh, is a member of the Ashok Chawla committee.

Bringing water under Central control was discussed at a Planning Commission meet in April to formulate the 12th Five-Year Plan. It suggested water law on the lines of the European Union where water is under one directive.

Government requires two-thirds majority in Parliament to shift a subject from the State to the Concurrent List. “It would be politically difficult, if not impossible, to enact such a Constitutional amendment,” thinks Ramaswamy Iyer, former secretary at the ministry of water resources. “It is also not necessary because the Centre can legislate on water even now,” he adds. The Constitution provides for Union interference only in inter-state water disputes.

In the past some subjects have been shifted from the State to the Concurrent List when it was understood that they were not being addressed appropriately, says P K Bakshi, a constitutional expert who is exploring the concurrent powers of the legislation of the Constitution.

The shift of supremacy of decision-making, says K K Venugopal, senior advocate, is important for water’s effective utilisation since most national bodies can only issue guidelines. Their implementation can be done only by the state government.

In November last year, civil society members met under the banner of Forum for Policy Dialogue on Water Conflict and concluded that the move would be resisted by the states. “The multi-faceted water conflicts in the country cannot be addressed by merely shifting water to the Concurrent List,” says K J Joy, coordinator of the forum. “We need democratic institutions at various levels which can decide on allocations, entitlements and uses,” he says.

Concurrent listing of water can only take the legal framework forward if it fills gaps in the existing governance of water, says Philippe Cullet, professor of international and environmental law at the School of Oriental and African Studies, University of London. He is also a senior visiting fellow at the Centre for Policy Research, in Delhi.

The move will enable long-term planning on the utilisation of water, thinks Tushaar Shah, senior fellow at the International Water Management Institute (IWMI) in Gujarat. IWMI is a non-profit based in Sri Lanka. Shah, however, fears the Centre may fail to deliver, as it has done in the past.

“Water is a community resource and needs to be left under the discretion of the community,” says Himanshu Thakkar, coordinator at the Centre for Water Policy, a non-profit in Delhi. The government is pushing for the move under international pressure, he alleges, adding, “For the past five to six years the World Bank has been stressing to put water under direct control of the Union government.” This would legally make river-linking projects and international involvement in water bodies easier.

“Much can be done to promote a holistic view of water even within the ambit of the existing Constitutional entries. Inter-state relations and a constructive relationship between the state and the civil society can also be improved,” says Iyer.

According to A K Ghosain, head of the department of civil engineering in IIT Delhi, what is required is proper implementation of the River Boards Act, which provides for the overall growth and development of interstate rivers. He also maintains that local level participation in decision-making should be encouraged. For this, “permanent water user associations should be set up at the local level which should interact directly with the River Basin Commissions,” he says.