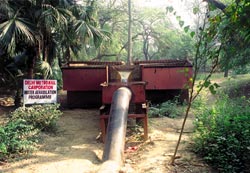 The metro railway project has brought in its train a problem on another front: management of water.

As digging proceeds on a daily basis, gallons of sub-soil water have to be extracted and disposed of. The Delhi Metro Rail Corporation (dmrc) has made elaborate arrangements not to waste the water by letting it flow into Yamuna river.

Given the depleting groundwater levels in Delhi, the dmrc has decided to use part of the water extracted in northern Delhi to replenish lakes in the nearby Kamala Nehru Ridge. The rest, it claims, goes to the Chandrawal Water Works of the Delhi Jal Board (djb).

The segment of the metro between Delhi University (North Campus) and the Inter-State Bus Terminus (isbt), say experts, is the most problematicsince it lies in the Yamuna flood plain. The corporation has, therefore, constructed a 1.5 kilometre-long pipeline, which brings about 2,000,000 litres of water to the ridge every day. It flows into two lakes before being released into Sarpakaar Jheel.

However, local residents are not satisfied. The "dried-up lakes" that dmrc mentions actually comprise two shallow ponds, which are never dry. Deep Mathur of the Municipal Corporation of Delhi (mcd) says: "They filled up in three weeks and now the water overflows into a ditch which takes it to the Yamuna. This is as good as pumping it into stormwater drains."

Interestingly, djb officials have practically no idea about the dmrc's plans to provide water to Chandrawal Water Works, whereas the dmrc is sending them "1600 litres of water per minute, free of cost", claims Rajesh Agarwal, Deputy Engineer, dmrc.