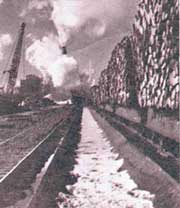 After days of water cannon debate, the Republican-initiated bill proposing a revision of the Clean Water Act has ultimately been passed by the us House of Representatives by a vote of 240 to 185. The revised version drastically handcuffs the Federal government's regulatory power and gives an industry chafing against the Clinton administration's overt pro-green attitude a near-autonomous authority to administer, as it pleases, waterbodies pollution regulations.

America obviously suffers from the Ancient Mariner syndrome: the perception is that there is enough clean water to go around, but too many drops are, well, gunk; which is why the issue shattered party barriers: 34 Republicans voted against the bill, while 45 "conservative" Democrats joined the Republican majority in favour.

Originally passed in 1974, the Clean Water Act gave the Environmental Protection Agency (epa) the authority to restrict the levels of pollutants released into waterbodies by industry and municipal authorities, and also laid down specific provisions for preserving wetlands as valuable ecosystems. It armed Federal authorities with broad powers to identify the areas.

The Act's revised format abolishes several of the anti-pollution measures established in the statute. But the most hotly debated provision of the Act states it will establish a new, rather narrow definition of what constitutes a wetland, ranking them in order of ecological value. The spitfire Democrats, vociferously supported by the environmentalist lobby, claims that the bill would "reverse decades of progress in cleaning up the nation's waters".

The anti-bill camp received a shot in the arm when on May 8, the National Academy of Sciences came up with a report attacking the controversial legislation. But last month, even as the Academy's work was being finally reviewed, the legislation was rammed through the House in a bipartisan committee vote. Now, the 268-page document prepared by a panel of 17 prominent wetland experts trashed the bill because it is impossible to "rank" wetlands according to their ecological value as it was not supported by enough scientific evidence.

The bill's supporters didn't give a damn. "Anybody in academia who wishes to defend the litany of nonsense that has occurred under the Clean Water Act is either unfamiliar with that nonsense or should have their academic credentials questioned," scoffed Jimmy Hayes, a Democrat representative from Louisiana, ready to defy his party's official line in a bid to cater to his industry-dominated constituency. But President Clinton is still banking upon the Senate to bail him out.