Water on the moon

Plans for a habitable moon are too much too soon 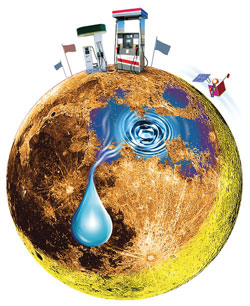 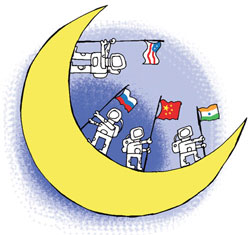 Nobody owns the
moon yet. If it
becomes economically
useful, several nations
might stake claims

Types of water on moon

EXOGENIC: Water from external sources such as comets striking the moon’s surface. ENDOGENIC: Water that originates on the moon is called endogenic. The rocks and soil on the moon contain 45 per cent oxygen combined with silicate. The hydrogen component comes from the solar wind. As a result of nuclear fusion, the sun constantly emits a stream of particles, mostly protons, which are positively charged hydrogen atoms. The wind strikes the soil on the surface of the moon, which has no magnetic field or atmosphere to protect it, and stimulates chemical reactions in which oxygen atoms in the soil combine with hydrogen nuclei to form water and hydroxyl ions.