Water poisoning has officials in a tizzy

As confusion reigns over how municipal water in three Agra localities was contaminated, self-appointed social workers are trying to exploit the tragedy. 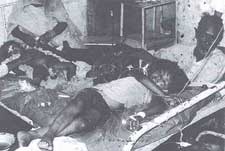 AFTER the tragedy, comes the gold rush. In the three Agra localities where several people died after drinking contaminated municipal water, self-styled social workers have surfaced, looking for a slice of the compensation.

These "leaders" have assumed the mantle of "champions of poisoned-water victims" and promise the bereaved families almost double the Rs 1.1 lakh compensation -- Rs 1 lakh from the state governor's fund and Rs 10,000 from the district authorities -- for each victim.

One such person, Ishwar Singh, poses as an office bearer of a social service organisation called Swasth Sangharsh Samiti and claims to represent Khatikpara, one of the affected colonies. Says Singh, "This locality is on edge and we will rally the people to ask for their due." He demands either compensation of at least Rs 2 lakh for each of those who were killed or that the government look after the dependants of the victims.
Ishwar claims 40 people died after drinking the contaminated water on May 20. But district magistrate Alok Ranjan says the figure is inflated. "At such moments, people jump on the bandwagon hoping for a dole from the government," he says.

"Immediately after the incident, I instructed additional district magistrate Hardev Singh to tour the affected areas with a team of officials and doctors. They reported 17 deaths and this is the figure I will stick to when paying compensation," Ranjan says. He disclosed 13 families have accepted the Rs 10,000 offered by the district authorities, but Ishwar says the money was returned.

Meanwhile, residents of the affected localities still refuse to drink tap water and prefer instead to trek in the heat to a hand pump to collect potable water. "We use tap water only to bathe and wash clothes," says Ravi Kumar, whose brother and two friends were victims of the poisoning.

He recalls, "My brother, friends and I had breakfast at a stall in the market and we drank water from the tap. At about 11 am, my brother started vomiting and frothing at the mouth. I rushed him to a clinic and the doctor advised me to take him to the nearby Sarojini Naidu Hospital, but he died before we could get there." He says he has received Rs 1.1 lakh as compensation and adds, "I am not sure of Ishwar's assurance."

"While this appears to be the direction in which Hardev Singh's inquiry is heading, we are not sure if we can pinpoint the culprit," says Ranjan. Following the incident, Agra Jal Nigam general manager R S Tewari was removed from office and B K Saxena, the junior engineer in charge of Sanjay Place, was suspended.
Even doctors are not sure what caused the poisoning. "All the victims came to the hospital with symptoms of organo-phosphoric toxin poisoning -- frothing at the mouth, eventual unconsciousness and death -- and we treated them for this," says S N Hospital principal Hari Gautam. He also points out that though the victims showed symptoms of organo-phosphoric poisoning, autopsy tests showed organochlorine poisoning, and adds, "therefore, we cannot say what they were poisoned by. We can only say they suffered from chemical poisoning."

Patients started trickling into S N Hospital around 1 pm on May 20 and the numbers peaked in the evening. Family members of the victims say they were surprised by the prompt and effective response of the doctors. Says Gautam, "At least 100 hospital employees worked round the clock." Free medicines and treatment were provided to all the victims.

Gautam admits the administration and the hospital did not have adequate quantities of an injection required to treat organo-phosphoric poisoning, but by midnight, Ranjan had arranged for the drug to be airlifted from Delhi and Kanpur.