PM mouths concepts which exist nowhere in the document 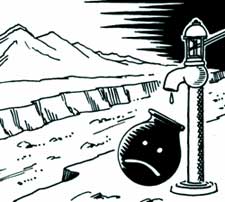 The Prime Minister (pm) Atal Bihari Vajpayee's vision of water management does not filter into the National Water Policy, which he released on April 1, 2002. His speech was totally at variance with the policy he unveiled. Was it mere rhetoric or does he have no say in guiding the policy of the government he heads?

While the pm emphasised that water belongs to the community, the water policy gives government machinery total control over this resource. "The community is the rightful custodian of water," Vajpayee emphasised. "But the policy declares water as a 'property' vested in the nation. It dilutes water as a community resource and it becomes nationalised," says Magsaysay award winner Rajendra Singh of Tarun Bharat Sangh that has helped the people to change the arid landscape in Rajasthan through traditional water harvesting methods.

The pm's speech stressed on "local management of water resources". But the policy is silent on this need and advocates an old, disastrous model of bureaucratic control and management. It is still rooted in the principle that people's participation means that people should participate in government programmes. In fact, the policy mentions the word "community" only once and uses the phrase "peoples' participation" only twice.

"It is a patch work document with no vision and the guidelines emphasise bureaucratic management," says Ramasamy Iyer, former secretary in the ministry of water resources. "As water belongs to the community, it becomes important to have a public debate on the policy before passing it. All stakeholders must be involved in the making of the policy," he advises.

The pm also wished to invest in community water management based on rainwater harvesting which according to him is a "powerful idea whose time has come". Paradoxically, the water policy merely makes stray references to rain water harvesting and makes no proposal to revive it. The document does not share the pm's vision that community- based rainwater harvesting has the potential to drought-proof the entire country.

Yet another dichotomy is that while the pm blames diesel subsidies for the over extraction of groundwater, the price of diesel has been reduced, paving the way for further indiscriminate extraction. The controversial inter-basin river conflicts are left for the tribunal to decide, that seldom takes less than six years to do so.

There is thus a sharp contrast between the pm's viewpoint and the policy released by his government. As it stands, the policy will remain ineffectual because it is far removed from the two important challenges of water management today -- rainwater harvesting and community ownership.