Water prices up down under 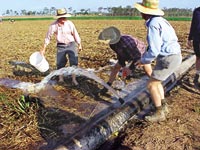 The worst drought of the century to have hit Australia has made the country realise what a valuable commodity water is. Much to the distress of the farming community and policymakers, traders are trying to cash in on the water shortage.

The price of irrigation rights has shot up by as much as 27 times in five years. A total of around a million megalitres of water is traded across the country in a year. Even as the world's second driest continent (after Antarctica), Australia has an exceedingly high rate of water consumption. Peter Blackmore, executive director, Murray-Darling Basin Commission, discloses that the per capita rate of water consumption in Australia is second only to the us. Calling water the biggest investment after housing, Robert Gerard, board member, Reserve Bank of Australia, opines: "Water is the biggest issue facing Australia. If you really want to make money, water rights are not going to depreciate."