Water shortage in the home of glaciers

Residents in the UP Himalaya, abundant in rivers and glaciers and covered by a piped water network, are experiencing a water shortage caused by a range of other problems 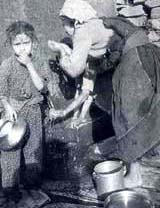 THE RICH out of greed and the poor out of need have damaged the fragile ecology of the Himalayan region so extensively the eight districts in the Kumaon and Garhwal region are gripped by a water shortage and law and order is gravely endangered, with village pitted against village and caste against caste. Warns Pradeep Tamta, an active member of Uttarakhand Sangharsh Vahini, "We are ready for even a bloodbath on the issue of water in the future."

It is paradoxical that inhabitants of the Uttar Pradesh Himalaya, which is the home of huge glaciers and through which major rivers flow, should experience water scarcity all their lives. Besides the shortage, an aspect of drinking water in the region is that it is hard and pure in the upper altitudes though its quality may be poor in the valleys. In addition, water contamination occurs because of washing and bathing at reservoirs and collection points and because of tampering with pipelines and chlorinators and inefficient sand filters.
Solving the water problem in the area has also been made difficult due to a continuing rift between the UP Jal Nigam, once the only water agency for the rural and urban areas in the region, and the UP Jal Sansthan, which took over all operational and maintenance work from 1975. Money is not available regularly to repair pipelines damaged by landslides during the monsoon and winter seasons. And, funds released for maintenance are not properly utilised because the agencies do not have the required manpower.

Piped water systems now cover practically the entire UP mountain region, but about 50 per cent of the population do not benefit from it because they live in remote toks (hamlets). These villagers depend, as they have through history, on natural water sources such as springs and streams, not necessarily close by. But even these sources may not be available indefinitely, for studies over the past 20 years indicate that as much as 40 per cent of the springs are steadily drying up and their discharge rate is declining rapidly.

But what handicaps the work to provide drinking water to all the mountain residents is the constant bickering between the two state water departments, with the UP Irrigation department standing by, eager to fish in troubled waters. Experts estimate as much as 8 per cent of spring water in the region is wasted mainly because lack of coordination results in each agency tapping water sources indiscriminately. Also, the Jal Sansthan has not taken up maintenance of several projects finished by the Jal Nigam, citing "various technical faults." Indifferent government officials and a people reduced to apathy by grinding poverty, self-serving community leaders and frequent natural calamities, such as the 1991 earthquake, have multiplied the problem. Dharuchala, in picturesque Pithoragarh district, typifies the water problems that plague the hill regions. Flanked by snow-capped mountains, Dharuchala has a population of about 3,000 and is situated in a valley that has annual rainfall of 100 cm to 150 cm. The area is prone to earthquakes and landslides are common.

Piped water was introduced in the valley in the early 1960s. Of 101 water schemes that have been taken up, 14 are in partial operation in 13 villages and 24 schemes are totally inoperative. Twelve of the villages are without piped water because the villagers disconnected the pipelines, pursuing internecine quarrels, prompted by a state government takeover of all water sources, which was in direct conflict with a hill tradition that a village has exclusive use of a water source within its limits. Despite a Rs 65-lakh reorganisation scheme drawn up by Jal Sansthan, Dharuchala residents get only about 30 litres supplied during three hours a day. There are plans, however, to augment the existing water storage capacity with a 350 kl tank that will hold water brought in from a gadhera 6 km away.

A major hurdle in improving the water supply position is the lack of adequate data on underground water in the area. Neither the Jal Nigam nor the Jal Sansthan has a geo-hydrological wing and no survey work has been carried out in the UP Himalaya to discover new water resources. And, headed for hot water is a water harvesting scheme prepared by a central technical mission about four years ago which has evoked little enthusiasm from officials or the local population. The project calls for pipes to be laid on roofs through which rainwater can be directed to a cement storage tank. S M Hammad, a veteran of the Jal Nigam in Almora and Nainital who has been studying the efficacy of a similar scheme in Meghalaya, pointed out that the UP hills had long spells of dry weather. He also said the villagers cultivate vegetables on the roofs of their houses and stable their livestock in ground-floor sheds, which, being adjacent to the proposed water storage tank, would result in polluted water.

Water experts are generally agreed that water scarcity in the UP hills cannot be ended unless strategies that are economically, environmentally and socially sustainable are adopted with the full involvement of local residents and gram sabhas. In addition, local residents should be instructed in how to keep their water sources free from contamination and they should be entrusted with the operation and maintenance of their supply system. Finally, adequate funding is essential if there is to be an efficient rural water supply network serving the people of the UP Himalaya region.

Puranchand Sharma, a politician from Almora, who can speak of hill development from the perspective of a state minister, conceded water is a problem in the hill areas, but says it is not as alarming as it is in the plains. He says all problems of the hill region could be solved if the eight districts were merged into a separate hill state, Uttarakhand.