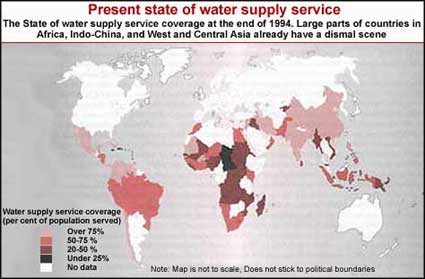 If a country is using 20-40 per cent of available freshwater, it is said to be suffering from 'water stress" according to the estimates of the United Nations Environment Programme. About one-third of the population of the world is living in countries that are experiencing moderate to high water stress. As demand for water grows, this figure could rise to two-thirds. As world population is projected to grow from 5.7 billion in 1995 to 9.4 billion in 2050, about 18 per cent of the world population will be in water-scarce areas and 24 per cent in water-stress areas. Scarcity and pollution of water could have serious health implications.