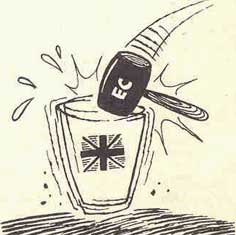 THE EUROPEAN Court of Justice has convicted Britain for allowing high nitrate content in drinking water, court upheld an EC complaint that in 28 water supply areas of Britain in 1989, nitrate levels were above the safe limit of 50 parts per million as laid down by the EC.

Responding to the judgement, British environment secretary Michael Howard said, "There is no danger to health. However environmental groups call it a "land-mark decision".

The problem in the affected areas has been caused by excessive use of fertilizers, which take up upto 40 years to percolate to underground water suppies.