Savda Ghevra vs Delhi: How effective septage management differs even with the same city

Centre for Science and Environment did a comparative analysis on septage management in Delhi and a resttlement colony located on its border; here is what it found 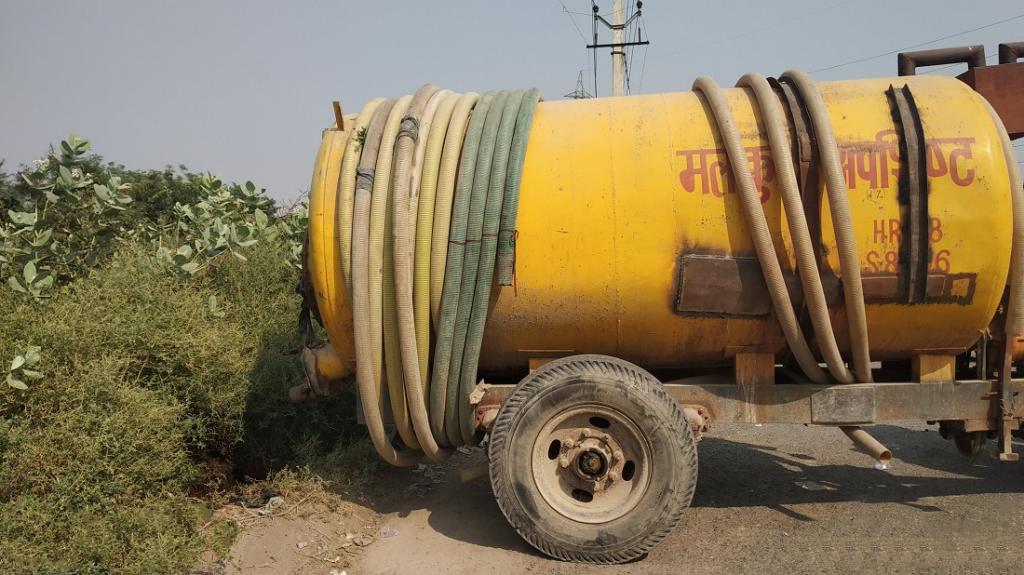 A first step towards providing adequate sanitation services is to monitor the sanitation service chain. One has to identify its strengths and weaknesses — from containment to emptying, transport, treatment and safe disposal or resource recovery.

Shit flow diagram (SFD) is one such easy-to-understand advocacy and decision-support tool which helps in identification of these strengths and weaknesses.

This helps in shifting the focus of attention, investment and activities towards better faecal sludge management, thereby improving the situation of all urban poor residents.

The management of excreta in cities across the globe is still an unsolved puzzle, largely in low and middle-income countries. South Asian countries still struggle to collect the data pertaining to the fate of excreta in their cities.

The wide diversity and complexities in the city settings and associated provisioning of water and sewerage infrastructure hinders the complete understanding of the sanitation situation in the city.

More than half of the urban population in developing countries lives in unplanned settlements that have negligible or marginal sanitation facilities.

Delhi, the capital city of India, is a prime example as more than half of its population resides in unplanned settlements despite the inception of its first master plan in 1962.

Delhi is a complex agglomeration of eight types of settlement according to DUEIIP (Delhi Urban Environment and Infrastructure Improvement Project) 2021. One one of the eight types is termed as ‘planned’.

Delhi-based non-profit Centre for Science and environment (CSE) has been involved in the preparation of SFDs all over India and abroad. It has made a considerable contribution to support the production and review of good-quality SFDs as well as help train practitioners.

A demonstrated impact is the uptake of the approach by local, regional and national organisations and governmental agencies.

This is particularly true for India, South Africa (Water Reasearch Commission, with technical support from CSE, has launched a national campaign) and in states / cities in Africa and South Asia, where there is widespread use of SFDs for advocacy and as a tool to map progress across the sanitation value chain.

CSE investigated the degree to which access to basic services varies by preparing the SFD of Delhi urban agglomeration and compared it with the SFD prepared for an unauthorised settlement, JJ Resettlement Colony, Savda in Delhi.

Savda Ghevra is located 30-40 kilometres away from Delhi’s city centre near the Delhi-Haryana border in Tikri. The Savda Ghevra JJ Resettlement Colony was established in 2006.

The colony was built on 250 acres of agricultural land, owned by the neighbouring villages, Savda and Ghevra. People moved to the colony in two phases — in 2006-07 and 2009-10 — from 17 JJ clusters within Delhi, in the run up to the 2010 Commonwealth Games.

The current population of the colony is 55,000. JJ Resettlement Colonies are those that have been resettled from their original locations. Eighty-two such colonies have been made, mainly on the outskirts of the city. 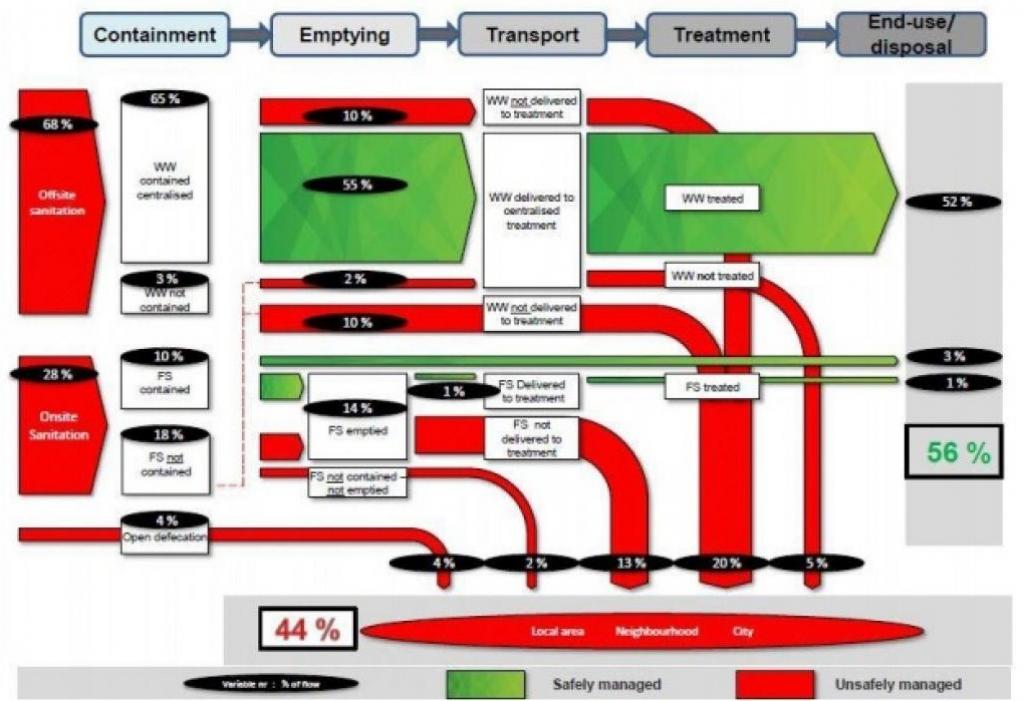 This comparative study was carried out by using the new feature of SFD, which helped us make a multi-city SFD graphic and three summary charts. 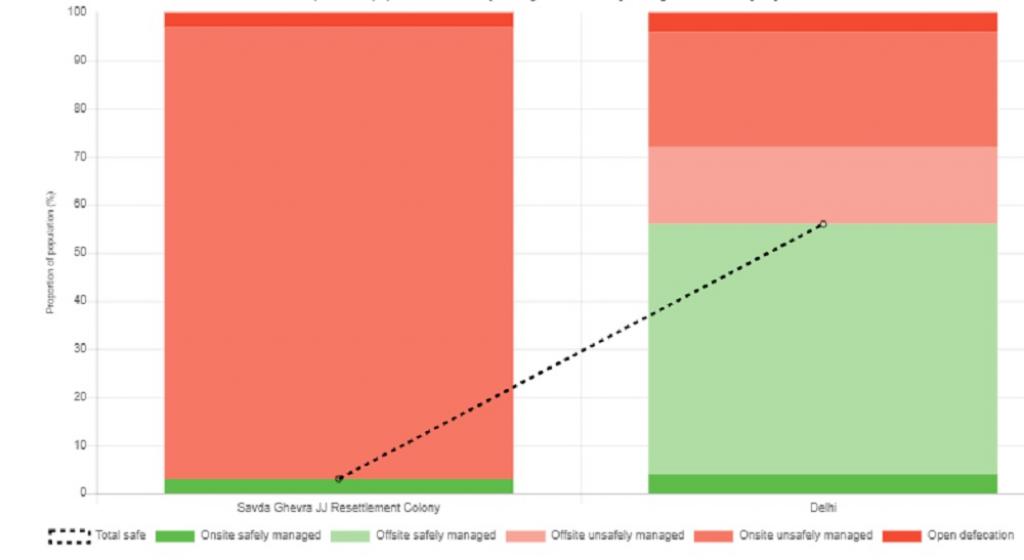 We found that the JJ Resettlement Colony was 97 per cent dependent on various types of onsite sanitation systems (OSS).

These ranged from a fully lined tank connected to an open drain in households (87 per cent), a communal septic tank (CST) linked to Decentralized Waste Water Treatment System (DEWATS) and septic tanks connected to open drains or soak pits.

Types and proportion of OSS in JJ Resettlement Colony, Savda 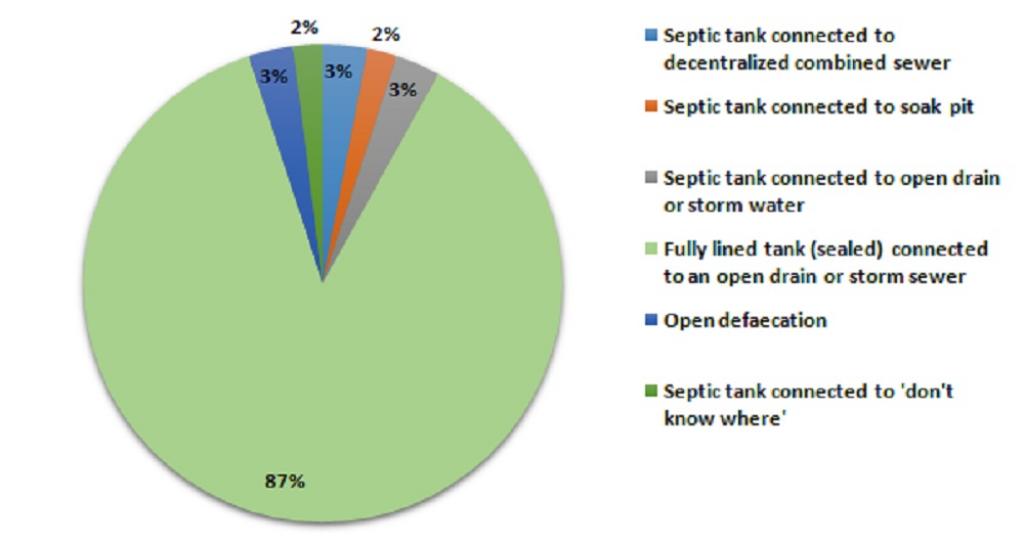 Emptying in the JJ Resettlement Colony, Savda was mainly carried out by two private desludging operators with mechanical means and on demand. The frequency of emptying varied from three months to several years.

The population that got its systems emptied was estimated to be 50 per cent for fully lined tanks and 90 per cent for septic tanks. The emptying of the septic tanks of community toilets was also carried out on request. No personal protective equipments were used during emptying.

In Delhi, emptying was done on demand and in a non-regulated manner by 400-500 vacuum tankers run by private service providers.

Two private desludging operators transport the septage in the colony with the help of tractor-mounted vacuum tanks. A network of simple sewer lines with manhole links home toilets to CST and subsequently to a DEWATS. This is used for transportation of faecal sludge.

In Delhi, faecal sludge is transported through a network that comprises of 7,000 km of sewers including trunk sewers and branch sewers (peripheral / internal sewers).

Savda has no designated site for discharge of faecal sludge. The mechanical emptiers usually illegally discharge it in nearby Bawana canal that joins the Najafgarh Drain.

The supernatant (developed when sludge is allowed to settle in a digester) from the fully lined tanks and septic tanks also flows in open drains that finally end in the same canal.

The supernatant from the CST is conveyed through simple sewer lines to the DEWATS. It is discharged to the canal flowing nearby after partial treatment.

The overall treatment capacity of Delhi STPs is 3,049 million litres per day (MLD). Their operational capacity is 2,671 MLD. There is no separate septage treatment plant.

We found that private emptiers in Dwarka, Delhi, discharge septage to the Pappankalla (Dwarka) STP. The treated water is supplied for various purposes in Delhi. The dried sludge is henceforth available free of cost to the intending consumers from the Delhi Jal Board’s STPs.

The overall comparative picture of JJ Resettlement Colony, Savda and Delhi depicts the discrepancy in the provisioning of sanitation facilities within the city.

Only 3-4 per cent of onsite sanitation is safely managed at both places. The JJ Resettlement Colony presents an example of unsafe sanitation which is mostly dependent upon OSS

Ninety-four per cent of the colony’s is unsafely managed while this comes to around 24 per cent in Delhi. The sanitation situation in Delhi is much better due to the presence of offsite sanitation systems.

SFDs also help cities to prepare city sanitation plans (CSP). All urban local bodies are to develop CSPs based on SFDs according to an Advisory on Onsite and Offsite Sewage Management released by the Union Ministry of Housing and Urban Affairs July 3, 2020.

The advisory also insists that ULBs use SFDs for monitoring progress.

Understanding the existing sanitation situation in a city and identifying gaps in service delivery to its low-income settlements with SFDs helps authorities plan the integration of these settlements for sustainable and holistic sanitation management.

The parts of a city not connected with the sewer system, especially the peri urban and unauthorised colonies, can implement onsite or decentralised treatment systems as a long-term, sustainable option.

Delhi’s Aya Nagar showcases such an example to get access to improved sanitation with the help of a decentralised treatment system.

City policy and planning also play an important role in envisaging these context-specific solutions. However, the draft Master Plan of Delhi 2041 fails to address the issues and challenges of sanitation for Delhi.

It misses out on the need of decentralised systems as a solution for such colonies and common areas, that lack in basic sanitation facilities. According to DUEIIP 2021, Delhi has 675 slum and JJ Clusters, 1,797 unauthorised colonies, old dilapidated areas and 362 villages which constitute about one-third of Delhi’s population.

Incorporating spatial mapping in SFDs will aid in targeted planning and identifying priority areas for interventions and monitoring in such areas.