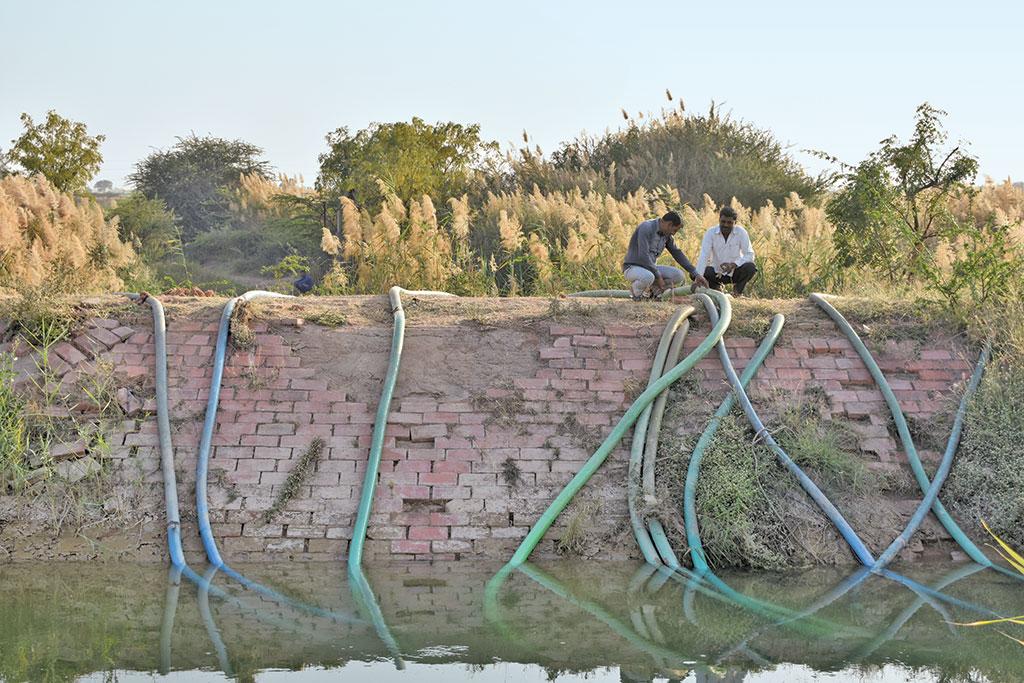 Farmers at Kumbharia village in Morbi siphon canal water and store in low-lying areas to ensure last rounds of irrigation to their rabi crops (Photos: jitendra)

It's February 11. The sun is yet to shine over Morbi district in Gujarat’s arid Saurashtra region. Thousands of diesel pumps suddenly start blaring across a branch canal of the Narmada, passing through Khirai village. Hundreds of farmers have congregated along the canal to draw as much water as possible and store it in low-lying areas. “The canal level is receding fast. The government had earlier said that water from the Sardar Sarovar Project (SSP) dam will be available for irrigation till March 15, but now it has advanced the date by a month,” says Rohit Sanjya, a farmer from the village. He says the revised decision has put the entire winter crop at risk. “The crops are in near-ripening stage, and need a couple of rounds of watering before they can be harvested in March-April. We are trying to secure water for these last rounds of irrigation before the government cuts off water supply,” says Sanjya, who has grown wheat, cumin and garlic on his 3 hectare (ha) field.

The situation is even more chaotic in other villages. “The government has deployed the Central Reserve Police Force that visits our village every day to ensure that no one is siphoning water. But we have already secured enough to save the wheat crop,” says Hitesh Patel of Morbi’s Khankhrechi village. In Banaskantha, an arid district adjoining drought-prone Kachchh, a platoon of police raided the Palanpur village on February 5 and severed all the pipes installed to lift water from the canal. The farmers are now on the run fearing arrest. “We had never witnessed such an alarming situation over water,” says Sanjya. “While raising the height of SSP dam, the government kept assuring that it would provide water to the parched Kachchh and Saura shtra regions. But our canals are running dry in the first year of the dam functioning at its full capacity,” says Sanjya ruefully.

On February 16, farmers from several villages in Morbi met the Sardar Sarovar Narmda Nigam Limited (SSNL) officials managing the branch canal. “They have unofficially allowed us to draw canal water for irrigation but have asked us to be cautious as the police can come for inspection at any moment,” says D P Patel of Kumbharia village of Surendranagar district. And this is just the beginning of the crisis, he adds.

The government advisory issued on January 22 has also asked farmers not to grow summer crops with the hope of getting Narmada water. “But summer crop is an important source of fodder,” says Jayram Bhai Patel, a marginal farmer from Khirai. Rearing livestock is the mainstay of most farmers in this drought-prone region and crops like sorghum, pearl millet and sesame are grown on almost 0.85 million ha. “My three buffaloes and one cow produce over 13 litres of milk which is my main source of income. If I fail to grow any fodder, I’ll have to spend Rs 200 a day on buying it,” he adds. 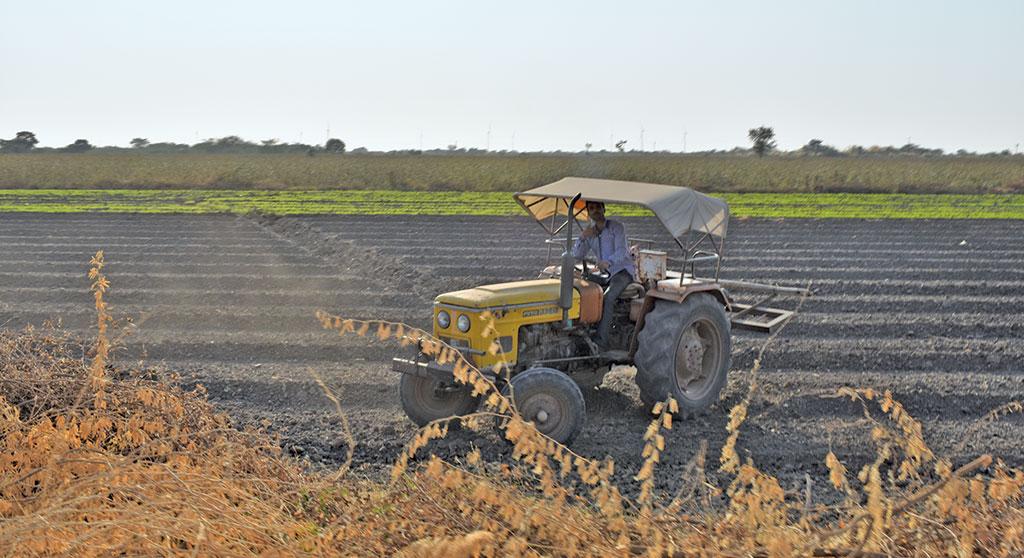 Hari Desai, Ahmedabad-based political commentator who writes extensively on Narmada issues, sees a political hand in the making of the crisis. “Though the Bharatiya Janata Party (BJP) won the Gujarat Assembly election in December 2017, the party faced a wipeout in Morbi and Banaskantha. A BJP legislator who lost the election openly threa tened that he would teach people a lesson by not letting them lift canal water for agriculture,” says Desai.

The government, however, attributes the crisis to deficit rainfall in the river’s upper catchment in Madhya Pradesh. “Due to changing climate, the Narmada’s upstream states have received less rainfall during the 2017 monsoon,” B N Navlawala, water advisor to Gujarat chief minister Vijay Rupani tells Down To Earth (DTE). So, SSP dam has received 14.55 million acre feet (MAF) of water instead of the usual 28 MAF. Since the water is shared among the four Narmada basin states of Gujarat, Madhya Pradesh, Mahar ashtra and Rajasthan, Gujarat’s share has been reduced to almost half—4.71 MAF from the usual 9 MAF, he adds. 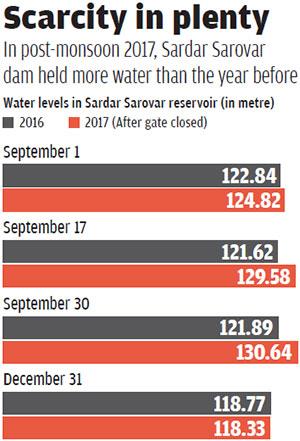 While the facts shared by Navlawala are unquestionable, what remains unexplained is before the monsoon came to an end, water level in the dam had for the first time reached the maximum 130.64 metre height in September. This means the water level had risen by 8.75 m when compared to the same month last year. This is 1.5 MAF of surplus water. Then where did all the water go?

DTE tries to trace the genesis of the crisis, and finds that in the post-monsoon period in 2017, SSP reservoir held more water than the year before. The trend continued till Decem ber 31 when the reservoir dipped to its 2016 December level. This was not a small reduction. While in 2016, water level had dipped by just 3.12 m between September and December, the dip was a gargantuan 11.67 m for the same period in 2017 (see ‘Scarcity in plenty’).

Little wonder then that on January 12, 2018, chief secretary of the state J N Singh told the media the state was going to face an acute water scarcity as the SSP reservoir had fallen to an alarmingly low level. On February 20, the reservoir fell below the drawdown level (when water has to be pumped) of 110.64 metres, the lowest in a decade. SSNL has shut down all power houses. A senior officer at the Narmada Control Authority (NCA), on the condition of anonymity, says, “It was broad daylight robbery of water. And everyone knew who had stolen it”. So, what exactly happened between September and December?

Call it a well-planned political gimmick or plain coincidence, the inauguration of the controversial SSP dam could not have been timed better. On September 17, 2017, Prime Minister Narendra Modi celebrated his birthday by opening the gate of the dam in his home state. The inaugural event marked the culmination of the fortnight-long Ma Narmada Mahotsav, launched by the Gujarat government to celebrate completion of the six-decade-long project. With the assembly election just two months away, Modi apparently wanted to showcase that he has fulfilled his electoral promise of taking the Narmada waters to the Saurashtra and Kachchh regions.

Water from one of the largest gravity dams in the world quickly flowed across the 458 km-long main canals, their branch and minor canals, and all the connected dams. For the first time, the residents of arid Rajkot city saw the reservoir on the Aji dam overflowing. Water was also supplied to different dam reservoirs that were full to the brim following the rainy season. “We were surprised to see water spilling out of Machchhu dam to the sea and all the branch canals overflowing,” says Sanjya. “It was as if our water crisis was over,” he adds. 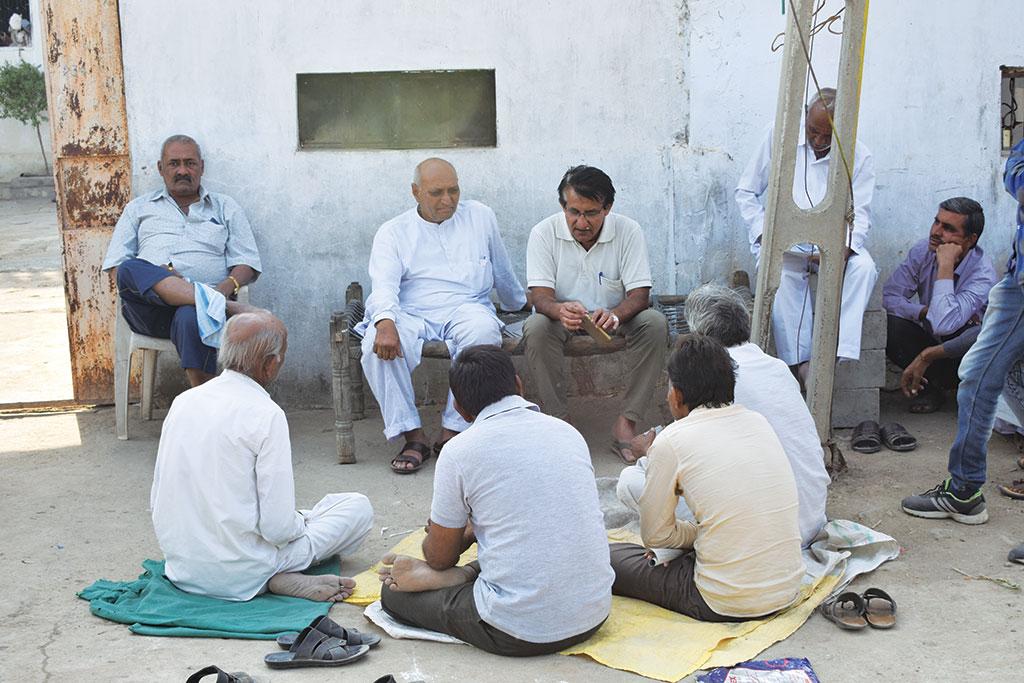 Instead, the sudden inflow of water has landed Gujarat farmers in a strange situation. The socio-economic review released by the Gujarat government on February 22 estimates that the production of food crops would dip by 10 per cent in 2017-18. This is despite that the area under rabi crops has increased this year by 14 per cent as compared to a normal year. The area under pulses has doubled, while that under oil seeds has increased by 8 per cent and that under garlic by an astounding 222 per cent.

“It was a sheer wastage of water,” says Sagar Rabari, secretary of Khedut Samaj, the largest farmers group in the state. When it came to reaping dividends of the rabi crops, the water started disappearing. The farmers of Gujarat are definitely heading towards losses this season, he says. Besides, the water released from the dam did not reach the last mile as nearly half of the proposed branch and minor canals are yet to be built. The existing canals simply kept spilling over, says Rabari. A report submitted in the legislative assembly shows that of the 71,748 km of proposed canals, 44,300 km was built till 2016.

Vidyut Joshi, who has written extensively on problems surrounding SSP, says the government does not seem to be paying much attention to the construction of branch and minor canals that can actually take the Narmada water to people. The existing canals can irrigate only 0.3 million ha instead of the 1.8 million ha promised by the government, he adds.

The grand Narmada water fiasco had another side-effect. Every year, the canal head power house (CHPH) of SSP dam must produce 250 MW of electricity, which is then shared among Gujarat, Maharashtra and Madhya Pradesh in the ratio of 16:27:57. But since CHPH is operated based on irrigation requirement of Gujarat and Rajasthan and availability of water in the reservoir, not a single unit has been generated since July 2017, says a senior engineer at NCA. This means Gujarat will now have to financially compensate Maharshtra and Madhya Pradesh for not supplying hydroelectricity. When asked about the compensation amount, Navlawala evaded the query. Electricity production at CHPH would have ensured water availability to downstream areas, which are facing water scarcity.

“If the catchment of the Narmada faced deficit monsoon then why did the Prime Minister open the dam gates on his birthday?” asks Rabari. He is now travelling across Surendranagar, Morbi and Ahmedabad to mobilise farmers to demand data regarding Narmada water usage from the state government.