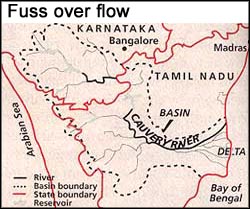 THE dispute between Karnataka and Tamil Nadu regarding the distribution of the Cauvery river water in the winter of 1995, had become a constitutional crisis, Early this year, the Narasimha Rao government appointed a three- member panel which was expected to submit a report to the Centre after assessing the crop pattern and stress in the Cauvery basin and the delta(Down To Earth, Vol 4, No 18). According to Y K Alagh, vice-chancellor, Jawaharlal Nehru University, New Delhi, and head of the panel, the report has recently been submitted to the government. although it has not been made public yet. Earlier reports had assessed crop condition in region during normal rainfall seasons, and not in the dry months.

Speaking to Down To Earth on February 1, Y K Alagh, refusing to comment categorically on the panel's findings, said, "I think both the states are great, and I am glad to render my service for a national cause. I can only say that the crisis is a seasonal problem, under discussion since last quarter of the last century, with which the farmers in both the states have learnt to live. External water supply may be required to lessen their sufferings."

In Alagh's opinion, southern India has a very complex crop pattern (rotating kuruva, samba and thaladi rice crops) dependent mainly on the north- east monsoon, as opposed to the north Indian crop pattern. The 'canal colonies' that modem Punjab boasts of today, were in fact, already present in the state of Mysore since long. His observations reaffirmed the position held by many experts that the crisis stems largely from the recent shift over to water-intensive cash crops, Several experts have opined that the failure of the northeast monsoon last year, triggered the recent crisis in the Cauvery basin. The dams had very little water; even satellite pictures showed a very low index of both ground and surface water.

The VC pointed out the correlation of the present water crisis: Tamil Nadu's needs heighten Karnataka's, and vice versa. He observed that both the states were actually water-strapped in different ways. And it is only the balancing of 'need' and 'usage'- important determinants of the irrigation methodology practised in the two states (the reliability is almost 75 per cent) - that can solve problems.

Referring to probable measures to reduce the sorrow of farmers in the Cauvery basin and the delta, Alagh said, "Water should be used in an optimum manner. There can be better sharing patterns, rationing and pricing of water, rainwater harvesting, creation of effective water markets and the like." Eventually, these measures are expected to improve the ground and surface water situation in the Cauvery basin.

He said that all these would be part of the National Water Policy which has been created to aid both Tamil Nadu and Karnataka; but it should be made "effectively operative", He commented, "Already, we are late in creating the policy."

Alagh sounded an ominous prediction. He said, "In the very ear future, India is going to be a water-strapped economy. Mostly, the country will face groundwater irrigation problems, increasing salinity and ingress in several regions marked by a falling water table. Pricing of water may teach policymakers a few lessons. The need of the hour is societal and political wisdom, which can put the problems to rest."