HOW many years does it take for a reservoir to fill with sediments? How fast are nutrients supplied to streams and soils? Many a time such questions come in the way of policymaking. The answers lie in the rate at which the hill slopes upstream are eroding. It is important to know the propensity with which river currents cut rocks in the riverbed and carve paths for the water. Called river incision, the phenomenon plays an important role in shaping the structure of mountains, controls carbon cycle and delivers sediment to coast and reefs.

Researchers at Harvard University, Massachusetts, US, have now found a relationship between river incision and rainfall. They studied a network of rivers on the Hawaiian island of Kauai. The island gets a wide range of rainfall, which is highest at Mt Waialeale and decreases gradually to the southwestern plain. The annual rainfall in Mt Waialeale is 9.5m/yr and in plains it is 0.5m/yr. At the same time, non-climatic factors that may affect river incision, such as rock types and tectonic processes, show little variation. So, rainfall is the only parameter that can ascertain erosion. 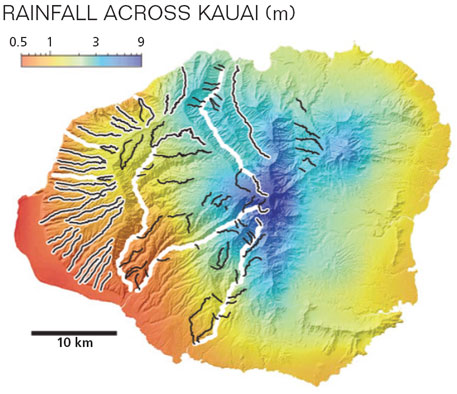 The researchers analysed the rainfall percentage from the year 1949 to 2000 from Mt Waialeale, which is at the centre of Kauai, to the southwestern part of the island. The study shows incision is higher in the mountain area than in the plains and the rate at which rivers cut into the bedrock increases under heavier rainfall. This shows the link between climate and river incision. The study was published on April 11 in Nature.

“This study is important because it provides empirical support for an idea that has been around for a long time, but has been hard to verify,” says Ken Ferrier, corresponding author of the study.

The process of bedrock river incision is slow on human timescales—most rivers cut through less than one mm of rock per year—but it is an important process because it drives the erosion of the surrounding terrain, he says. “Our analysis provides evidence that river incision rates do indeed depend on precipitation rates, and thus that landscapes are sensitive to climate,” he adds.