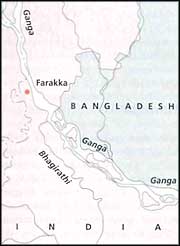 "At least we have now begun to talk "to" each other, rather than spitting venom "at" each other in public," says BG Verghese of Centre for Policy Research, New Delhi. Verghese, a veteran on the changing trends of Indo-Bangladesh relations, was commenting on the recently held talks between the foreign secretaries of the two nations. The bureaucrats, Salman Haidar of India and his Bangladeshi counterpart Farooq Sobhan, met at Dhaka on 24 and 25 June to deliberate, primarily, on the issue that has for decades been considered the single most important factor responsible for the steadily disintegrating Indo-Bangladeshi ties---sharing the Ganga water. And after two sessions of intense dialogue they both expressed satisfaction over the "positive" outcome of the meeting which, they declared, has resulted in the revival of the long dormant Joint River Commission (JRC).

The Commission, that came into being in 1972, was designed to open up a channel of communication between the two nations which share as many as 54 rivers. It was to be used to maximise benefits from the river systems and to formulate measures that would prove mutually beneficial. It was also expected that the Commission would delve into more intricate issues like augmenting the flows into the Ganga and examining the operations of the Farakka barrage in West Bengal, the crutial point from where water is released downstream to flow into Bangladesh.

But Bangladesh has been constantly complaining about India's reluctance to release sufficient amount water from Farakka, which form the lifeline of its farming population in the dry season from March to May. India, on the other hand, pointed out that the water level of Ganga has been come down considerably, swamping the port of Calcutta with layers of silt. And the Ganga water is desperately required there for flushing-out operations, leaving India in no position to release larger amounts of water.

The issue has, taken a strangely comical turn, with both the sparring partners producing data which are wildly contradictory. There has been a difference of as much as 7000 to 8000 cusecs of water between the points of water released in Farakka, as claimed by the Indian technical experts, and the quantum of flow at Hardinge bridge in Bangladesh, put forward by the Bangladeshis. "No one has been able to explain where the extra amount disappeared along that 15 Km downstream stretch, between Farakka and Hardinge bridge," says BG Verghese. Now, however, the situation is likely to improve. The two foreign secretaries have agreed that the countries should jointly monitor the flow of the Ganga at four different points. The other rivers which traverse the subcontinent will also be brought under surveillance.

It is not surprising, therefore, that at the end of the two-day long meeting, the mood in both the camps was upbeat. "India has displayed a new flexibility and willingnes to have transparancy, which is a departure from the past attitude. It will help to promote confidence building, " Farooq Sobhan told the press in Dhaka. He said the nagging dispute on water-sharing generated strong anti-India sentiments among the Bangladeshi people. Now with this "positive development" things are likely to settle down more amicably. Haidar, in his statement sounded as hopeful. India is quite sensitive to Bangladesh's concern and is ready to go all out for a permanent solution, he assured.

"The process has begun and the bureaucrats can now be expected to push the agenda up to the policy makers and the governments. A channel of direct contact has been established. Till now the battle was being carried on through the media and at the international fora, where the basic issue was needlessly complicated and to a large extent distorted. We have at last been able to put a stop to this unhealthy practice," he opines. He is particularly happy about the setting up of a joint monitoring system of all the 54 rivers. "This will put the matter in a broader persepective. Tracking the flow of only the Ganga made the process too narrow. Now mutual adjustments can be made at various regions, giving the governments wider berth and a larger platform to thrash out the problem," he says.

Not everyone, however, is feeling so optimistic. "I do not believe any substantive progress has been made. The reaction of the people of Dhaka, too, has been lukewarm," comments Reaz Uddin Ahmed, editor of Dhaka's premier newsdaily, Financial Express.

He is disappointed that during the course of the meeting," neither side indicated anything new". "It was clear that the bureaucrats were blindly following the line dotted by the political leaders," he said derisively. And with the crutial elections looming large in the horizon, both in India and in Bangladesh, it is unlikely that either of the ruling parties will risk inviting the ire of any section of the electorate by taking decisive action on so sensitive an issue.