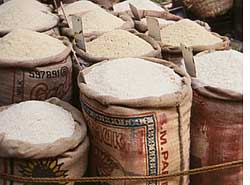 Why Gobindobhog rice fails to yield in saline soil?

gobindobhog aromatic rice is essential to many delicacies in eastern India. This small-grain rice variety commands high premium in domestic and international markets. But its cultivation is limited to a few districts, such as Nadia, Murshidabad, Bankura and Purulia, in West Bengal. Much of the state's agricultural land is unfit for its cultivation, because Gobindobhog is sensitive to coastal saline ecosystem.

A team of agriculture scientists from two institutions in Kolkata--University of Calcutta and Bose Institute--recently found out how salinity affects the rice variety. They zeroed in on a gene that imparts salt stress tolerance to paddy plants for long time and found that it remains suppressed in Gobindobhog. Since managing soil salinity is a problem, the findings, published in Plant Cell Reports (volume 27, 8) in August, offer a chance to enhance the expression of the gene in Gobindobhog and make it salt-tolerant.

To understand the salt stress in Gobindobhog, Aryadeep Roychoudhury from Calcutta university and his team compared it with a salt-sensitive rice variety, M-1-48, and a salt-tolerant rice variety, Nonabokra. They exposed the seedlings to brine (a solution of sodium chloride) for 48 hours and analyzed the effects. The detrimental effects of salinity were most pronounced in Gobindobhog. "Its root length was inhibited by 46.8 per cent while the shoot length inhibition was 91.3 per cent," said Roychoudhury. Salinity also induced stress symptoms such as wilting and bleaching of leaves in it.

Exposure to excessive salt results in ion imbalance and water stress in cells and damages the cell membrane. This results in wilting. Gobindobhog seedlings suffered significant wilting, the scientists reported. Bleaching of leaves, caused due to chlorophyll loss, is also an important indicator of salt stress in plants. Gobindobhog seedlings lost over 57 per cent of chlorophyll, while M-1-48 and Nonabokra varieties lost 47 per cent and 34.4 per cent of the pigment. The salt-tolerant Nonabokra variety remained healthy and green. The team concluded that certain genes like Rab16A/SamDC and related proteins that helped Nonabokra overcome salt stress, were functioning poorly in Gobindobhog and M-1-48.

"Given the saline nature of much of the agricultural land in coastal India, the assessment was essential," said Himadri Sekhar Sen, an expert on soil salinity and former director of Central Research Institute of Jute & Allied Fibres (icar), West Bengal. The research also points out the fact that adequate measures need to be taken to protect the cultivar from salinity's adverse effects, Sen said.

The only small-grain aromatic rice variety grown in West Bengal's coastal saline soil is Gayasur, said Pranab Chattopadhyay of Bidhan Chandra Krishi Viswabidyalaya, Nadia, West Bengal. The scientists claim as new varieties of Gobindobhog are being developed, the future implications of the research could be interesting.

"We have developed four high yielding rice varieties of Gontrabhog, a type of Gobindobhog," said Jaydeb Chatterjee of Gontra Samabai Krishi Unnaian Samittee Limited, West Bengal. "But we can't cultivate them in saline ecosystem," he said. "Our findings will pave the way for extrapolating such studies," said Roychoudhury.