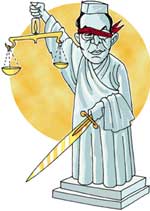 In a softening of stance, Indonesia recently said it is ready to negotiate an out-of-court settlement of the us$133.6 million civil lawsuit against us gold producer Newmont Mining Corp, charged with causing pollution in the Buyat Bay. But the trial of six Newmont executives facing criminal charges in the case will continue.

"On the civil case, we are ready to make an out-of-court settlement and we have made a team to work towards that," said chief economic minister Aburizal Bakrie. "But we will not interfere in the criminal case. If they are proven to be doing something against the law, they have to face criminal action." Bakrie said an agreement would probably include the cost of moving dozens of families living near the bay.

Though Newmont's vice president of Indonesian operations, Robert Gallagher, said he wasn't aware of such a settlement, he added that Newmont will consider helping move the villages. It may also boost financial aid to the area and monitor the bay's pollution levels for 20 years beyond the present three-year commitment.