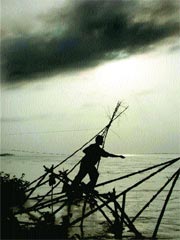 Every year, the month of May ends. India enters June, and expectations of rain. Small farmers scan the sky, reading the clouds (the big ones have subsidised irrigation pumps, and undemocratic canal water-sharing clout). Politicians begin to place calls to the New Delhi-based Indian Meterological Department (imd). Within the imd, scientists break out in a pox of activity. After all, it is their business to predict the south-west monsoon, in a country where 60 per cent of the land is rain-fed.

Oracles predicted monsoons, always when the king visited the shrine. Soothsayers predicted the monsoon, speaking in a trance, in many tongues, under the alert gaze of the village elite.

Predicting the monsoon is the perfect metaphor for political compulsion. Or, could it be a challenge to science?

This year, imd predicted a normal monsoon. It was flashed on all tv channels. All of us saw it. We didn't see imd scientists celebrating the 14th normal monsoon in a row. We saw politician-bytes: smiling sweaty faces with calculated expressions. 2002: another rain-filled year. Thank god, or votes.

2002 has flown in the face of political, and scientific, pronouncements.

14th normal monsoon? Does anybody remember the 1987 drought? Continuous drought since then, in some region or other in India?

Politicians have announced grand plans. India's rivers are to be interlinked. All liability on kharif loans for this year have been waived.
Being more conscientious, scientists are worried. Leading meteorologists attended a brainstorming session held at the Indian Institute of Sciences (iisc), Bangalore on November 28-29 this year. They found: except for an experimental model developed by a young researcher at the Indian Institute of Tropical Meteorology (iitm), Pune, no other model could predict the season correctly. Gosh.

Most models use numerous land, atmosphere and ocean parameters to compute the rainfall. The model developed by Atul Kumar Sahay of iitm used only sea surface temperature parameters, far and near, to simulate the deficit monsoon. imd scientists have now decided to look closer at the model. "We are surprised that Sahay's model, which uses sea surface temperatures, could correctly show the negative trend," says M Rajeevan of Long Range Forecasting, imd. "It may be either accidental or true. I personally feel there is a lot of physics in it (the model)."

The scientists cite an El Nio developed in the Northwest Pacific Ocean, and associated typhoons in the East China Sea, as the reasons for a weak monsoon in July this year. The month witnessed an unprecedented 49 per cent drop in rainfall. Even though the monsoon picked up in the next two months, the season ended with an overall deficit of 19 per cent.

"Long range forecasting is a tricky business the world over. It becomes all the more difficult when it comes to a complex weather system like the tropical monsoon," says Jayesh Srinivasan of the Centre for Atmospheric and Oceanic Sciences at iisc. The problem is that, in spite of advances in science and the advent of powerful computers and satellites, very little is known about the year-to-year variations in the monsoon.

Scientists the world over use two different models to predict seasonal rainfall. There exists a statistical model; it uses a complex body of land and sea surface temperatures, soil moisture, and snow cover to arrive at a prediction. Then there is the general circulation model, which dynamically forecasts seasonal rainfall with the help of very powerful computers. India, maintaining meterological data for 130 years, has been using the statistical method for many decades.

The first long-range prediction model developed by H F Blanford, the first director-general of imd, used a single parameter, the Himalayan snow. In 1907 Blanford's successor, Gilbert Walker, established that many more temperature and pressure parameters, including the Southern Oscillation (linked to El Nio) influenced the Indian monsoon. Subsequently, between 1924 and 1987, imd issued separate forecasts for two regions -- northwest India and peninsular India. But these forecasts proved correct only for about two-third of the total years.

In 1988, a team of imd and iitm scientists developed a new 16-parameter statistical model, which is in use till today (see box: IMD's parameters). But only on four occasions, in the last 14 years, has the actual rainfall been within the error limit of +/- four per cent of the forecast. Fortunately for imd, not many eyebrows were raised about the inaccuracy of its predictions.

Four of the original 16 parameters, whose link with the Indian monsoon was seen to be weakening, were replaced with four other new parameters in 2000.


Srinivasan says that such changes in the correlation of some parameters to the monsoon are bound to happen due to atmospheric changes. Take for example the snow cover -- a standard parameter. In the last 15 years the snow-covered area in India has shrunk by about two million square kilometres due to global warming.

The behaviour of this year's El Nio, too, was peculiar. For the first time in 500 years, the currents moved northward, instead of westwards, surprising many El Nio watchers. Besides, warming due to El Nio took place over west equatorial Pacific rather than the usual eastern part.

"It is time that India concentrated on general circulation models. Statistical models have their own limitations. Unless we do that there is no light at the end of the tunnel," says S M Kulshetra, former director-general of imd. Murari Lal, of the Indian Institute of Technology, New Delhi, too feels that dynamic modelling capabilities are the order of the day.

Their concerns about suitability of statistical models may not be all that misplaced. Says Rajeevan: "Many parameters used in the imd model, particularly land and atmospheric predictors, showed very favourable condition during this year," upsetting the whole calculation. Unless and until imd comes out with a better model we have to live with the unpredictable nature of the Indian monsoon. As Kulshetra says: "Science cannot be blamed for the shortcomings. What is required is to refine and use the tools available to make such the monsoon forecast more meaningful."