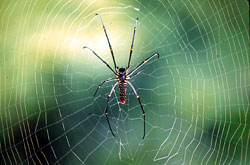 Cobwebs are not the messy nuisance as most of us think. Certain of these 'unwanted elements' can make ideal detectors for toxic pollutants as they can trap fine particles from the air. Grant Hose, an ecotoxicologist with the New South Wales Environment Protection Authority, Australia, made the discovery while studying the webs of spiders that live in the Grand arch of the Jenolan caves in the Blue mountains in New South Wales. Hose found that zinc and lead levels in the webs in this arch were two to 10 times as high as those in the nearby caves. It was not only metals the webs accumulated. In another cave, the Abercrombie arch, the webs contained three times as much phosphate as those in the Grand arch.

However, not all spiders' webs make useful pollution monitors. The ones Hose analysed were built by two species of spider that belong to a group called cribellates, which includes many common species such as house spiders. Cribellate webs are made from matted microscopic fibres that entangle their prey. This structure also makes them particularly good at trapping particulate pollution, says Hose's colleague Mike Gray from the Australian Museum in Sydney.