Electricity can be generated from a creeper plant, as an experiment in Madhya Pradesh has demonstrated 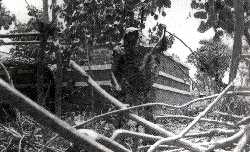 rural India provides ideal conditions for tapping various forms of renewable energy such as biogas, solar and wind energy. Biomass gasification is yet to be exploited for rural areas. Now, a new technique for generating electricity from ipomoea (creeping plants) has been developed by Development Alternatives, a ngo based in Tara Gram in Orchha, Madhya Pradesh.

The 100 kw power plant uses a biomass gasifier based on the technology developed by the Indian Institute of Science ( iis) , Bangalore. Gasificiation is the conversion of biomass into a combustible gas. The gasifier programme in India was launched in 1986 by the ministry of non-conventional energy sources, with the introduction of a 3.7 kw wood gasifier.

Locally known as Besaram , ipomoea is found in abundance near water bodies. One hectare yields approximately 160 tonnes of green biomass, which is equi-valent to 64 tonnes of useful feed stock for gasifier. The calorific value of ipomoea is 3800 kcal per kg and bulk density is 160 kg per cubic metre. Rajeev Gupta and Geeta Vaidyanathan, who are working in this project, said that a detailed survey was conducted over an area of 12 km to study the feasibility of the project. Ipomoea and Lantana camara , another creeper were identified as wastes that have no use in the region. For optimal functioning, the gasifier requires plant stems which are at least 5-30 mm thick. But Lantana has thinner stems, says Gupta.

Ipomoea is found near nullahs and moist areas. Two nullahs, Jhijhaura nala and Satar nala located near Tara Gram, together produce ipomoea equivalent to 835 tonnes of green feed stock for the gasifier. With a full load, the gasifier consumes about 70 kg per hour of feed stock and the fuel cost is approximately Rs 2 per kwh . "Under normal circumstances, with fluctuating load and varying demand, average diesel replacement rate has been consistently in excess of 80 per cent. Higher diesel replacement is possible by improved load management practices," Gupta told Down to Earth .

"We have been running the power plant for over one year. The electricity obtained from ipomoea is economically feasible and generates for villagers who supply the chopped biomass used as fuel," he says. The fuel cost is approximately Rs 2 per kwh and can be reduced to Rs 1.50 per kwh by running the plant on full capacity. The maximum cost of a unit is Rs 3.50 per kwh as compared to Rs 4.50 kwh for power supplied by the state.

The gasifier consists of only a reactor, cooler, blower and filter. Gas is generated inside the reactor which then goes through a cooling and cleaning system. The purified gas is then used for power generation. The combustible gas obtained is called wood gas or producer gas, a mixture of carbon monoxide and nitrogen.

Electricity can be generated only after the gasifier is switched on for at least 15 minutes. The opening of gas valve is connected to the burner and closing the valve to the engine, the cooling sprays are also activated. The feed stock is fed from the top and the gas flow rate is fixed at 18-20 gms per second. The air nozzles in the sides are opened and the char is torched till it is red hot. The quality of the gas is tested at the burner and then released into the engines, which are initially run on diesel. As soon as the gas is fed, there is a drop in the use of diesel, and the replacement rate recorded is in excess of 80 per cent.

Fresh ipomoea contains about 69 per cent moisture. This gasification is expected to be launched in the hilly areas which have ipomoea in abundance.