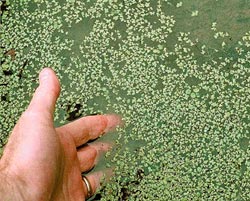 recently the Punjab government along with Punjab State Council for Science and Technology (pscst) launched a programme to clean village ponds using duckweed technology. The technology entails treating contaminated waterbodies with the help of tiny aquatic plants known as duckweeds (Lemnaceae). These plants have microbes in their roots that have the ability to break down pollutants. Many studies indicate that within 30-40 days, duckweeds can treat as much as 99 per cent of organic nutrients and dissolved solids present in wastewater. Moreover, weeds introduced once can be utilised for 15-20 years, making the technique quite cost-effective. The plants are also rich in proteins and, therefore, can become a good feed for fish.

For using the technology, a pond is first dried up and then divided into two parts using a lining. A sedimentation tank is built adjacent to it, through which all the contaminated water is routed to the first part of the pond. This allows solid materials in the wastewater to settle down in the tank itself. In the first part of the pond, duckweeds treat the contaminated water. After 30-40 days, the treated upper layer water is transferred to the second portion of the pond, where it is used for pisciculture.

This ecofriendly technology is being used in many parts of the world, including Australia, Peru, Bangladesh and the us. In India, the technology is mainly used by industries to clean their effluent ponds. Punjab government is the only state government to introduce a state-level programme for cleaning village ponds using the technology. The genesis of the government's new programme can be traced to 1998, when pscst had proposed a 'biomanagement plan for village environment improvement', the main thrust of which was the use of duckweed technology. Based on this plan, the state government carried out a few pilot projects, the success of which initiated the government to start the new programme (see 'Reeds to the rescue', Down To Earth , Vol 10, No 5, July 31, 2001, p50).

The first phase of the programme would cover ponds of Sandhuan and Peepalmajra villages that fall under the Rupnagar district. "We are starting with two villages on experimental basis and if the results are positive, then 10 more village ponds would be covered," says Seema Jain, deputy commissioner of the district. The total cost of treating Sandhuan village pond is estimated to be Rs 3.19 lakh.